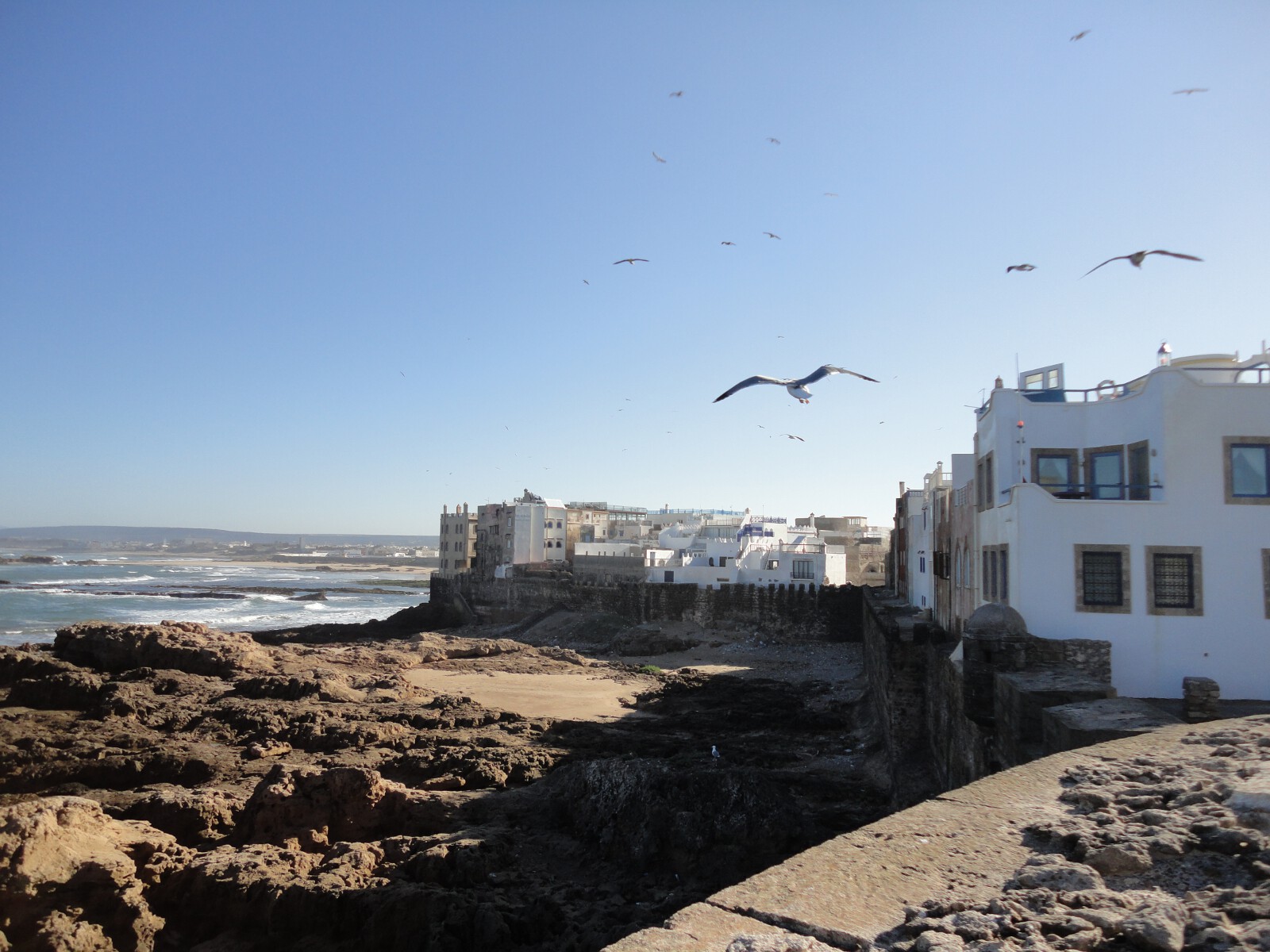 I woke up around 0900. It was bitterly cold and the wind was still whistling through the holes. The sea was also loud. The set of laundry, which I had washed the evening before, was not dried at all because of the humidity at the sea. I went into the community shower and packed up afterwards my stuff and determined that the Digicam would have hardly longer electricity. With the computer it didn’t look any better. I cursed again on the socket and left the dirty chamber direction sun. I walked again along the city wall through the area that was warned in the planet, again towards the center of the medina and finally again towards the bus station, about 10 min outside the walls of the medina.

This time I wanted to try something new and therefore had not bought a bus ticket. It was meanwhile already about 12.00 o’clock. The day before I had noticed at the arrival that there were some bus drivers screaming out the destination of the bus ride. It should be very easy to get to Agadir. So it was then also. After 5 minutes waiting I heard the loud screaming and went to the bus. How much does it cost and when does it start. The trip should cost about 80 Dh and the assistant wanted a small coffee bonus. The luggage in the storage space should cost also still extra 15 Dh. One day before I had been upset about such customs, but what the hell. The luggage and I were safe. After the procedure of the day before it took a while until the bus left. That was of course much later than I was informed.

Before I had made in the city still my last three photos, so that Digicam and the Netbook on the journey could be no assistance to me. So I wrote a travelogue and planned the next tour in the planet. When leaving the city and actually already before I had noticed that there was actually nothing to see here. The overnight stays are also very expensive and bad. The only thing worth seeing in itself was the ancient city itself, but it is not really worth driving there, especially as the windy one lived up to its nickname. This time also my plastic bag strategy proved itself. I had everything important and necessary in the bus always with me and did not have to make me serious thoughts. The trip went through a more or less sparsely populated area, which was quite well but flat overgrown. In the bus it was really warm again. After about half of the journey we stopped again in a coffee shop for a rest.

I bought some flat bread and some oranges. A dealer with sweet luggage also came through the bus whose baked goods tasted extremely good. When we left I had seen a boy without arms and legs sitting on the street. After a while the road went along near the sea. At several places there were quite a lot of surfers who took advantage of the high waves. After a hill Agadir appeared. Since we drove over the hill from the north one could see the city quite clearly from above. The city was in contrast to E. no small Kaff. We drove past the harbour, then east at the edge of the city. I was a bit surprised and decided to get off somewhere if someone else got off as well. I had the guess that the bus didn’t go directly to Agadir but to the nearby Inezgane.

Meanwhile it had become quite late for the day. It must have been about 1500 – 1600. The road where I got off should lead according to my small map from the planet directly west to the beach in the center. The road was very wide and there were numerous shops on all sides. This outside area of the city was by far not as western as in Marrakech the new town, but nevertheless an extreme difference to E. Sometime I had come to the beach. On a square in front of the sickle-shaped promenade a man in a suit asked me for fire. We got into conversation. He had been a correspondent for a magazine in DE and also spoke good German. We went into a nearby cafe, drank tea and talked about many peculiarities of the two countries. He also gave me valuable tips on how and in which order to go to which cities and what to see there. In retrospect, I did some of that. Mohammed gave me his phone number in case that something should be and we said goodbye. The sun was now setting. M. also mentioned that I better not spend the night in Agadir, but in Inezgane, because there is also the big bus station to continue and the hotels there are much cheaper.

I had already seen in the planet before that I should not get away in A. under 25€. After a walk on the beach with the setting sun I decided to do the same and save the money. There wasn’t really anything to see for tonight. Everything was clean and west of the beach. Accordingly also the hotels and restaurants. Because of the proximity to the sea it was not as cool after sunset as in M. or even in E. Of course there was also a McD at the promenade. I went east again to the center of the city. Here were wide streets with many partly high-priced shops. After a visit in a supermarket it became too colourful for me and I decided to go to the bus station. The bus station was not very far from the center. At a kiosk I asked a salesman for the number for the bus to Inezgane. Of course the bus just left with my arrival.

The next one didn’t arrive for half an hour, which gave me some opportunity to rest and look around. But then the bus surprised me with its modern design and its low cost of about 5 Dh. But the journey took quite a long time because it often stopped. I went to the bus driver and made him understand that he should tell me in Inezgane to get off. I didn’t know where I was at that time, because the area looked very deserted. When it became more urban again, everything was confusing and I couldn’t see a bus station anywhere. The driver let me out at the terminus in Inezgane. I tried to orient myself, but due to the darkness and the missing map I couldn’t find it. I walked in a direction I thought we had come from and there was a bus station. I asked several times for the way, always several times in a row to not run again in the wrong direction, because the people there had the habit, even if they did not know it one in the wrong direction to send. An eternal Rumgeirre in Spain had been to me a lesson.

After a short while also again open shops and some small restaurants appeared. According to the planet the cheapest hotel should cost about 80 Dh. I went at the place at the bus station along the stop only as a market place but not as a bus station turned out. Here were numerous shops and also hotels with their narrow entrances. I chose one and walked one floor higher through a narrow staircase to the porter who was sitting in a small cabin. The room should cost 40 Dh, double bed room. I looked at it and had nothing to complain about. Two beds and a table that was enough. Showers and toilet in the corridor. Again I hadn’t paid attention to the sockets. This time they weren’t even in the room.

Fortunately there were those however in the completely tiled restaurant in the second floor which was just closed, the doors however were open. I asked if it was still open and I could sit down there. That would work. I first decided to check out the numerous electronics stores for a micro USB to USB cable and a lamp to socket adapter. In the immediate vicinity I found the USB cable to charge my mobile phone, which I had forgotten at home, in the fourth store. The cable was taken simply from the packing of a Nokiahandies and cost me 25 i.e.. Now it applied to get something warm to food. Right across from the hotel and the electronics shop, two barbecue shops were still open on the edge of the market square. I inspected the food and strangely decided on a completely unknown dish. I also don’t know what it was anymore.

The salesman asked if I wanted something of a sauce from a pot over it I said yes. It cost maybe 25dh. After a short walk back to the hotel I realized that it might be sheep testicles. Now my appetite had passed and I gave the food to a dishevelled person sitting with a Pepsi bottle filled with red wine, which made him very happy. Somewhat suspicious I became choosy and the shops closed one by one. At a snack I then nevertheless stopped and sat down on the sidewalk, ordered something in the kind of Dönerteller with Cola for approx. 25 Dh. After the meal I went back to the hotel, fetched my three devices to the shop and sat down in the closed restaurant. The windows were all open, so that I had an overview of the place. In front of the hotel stood a donkey with donkey carts on the street and at a window sat one of the Arabic music loudly from his mobile phone gave. After loading, pictures on the computer copy and travel notes write I went then into my luxurius room to bed. 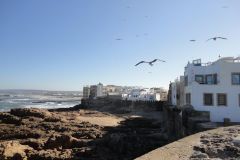 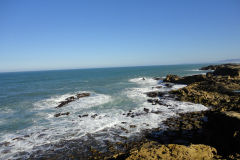 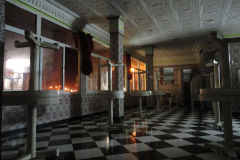 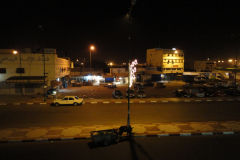 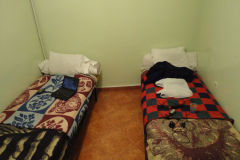 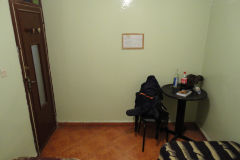