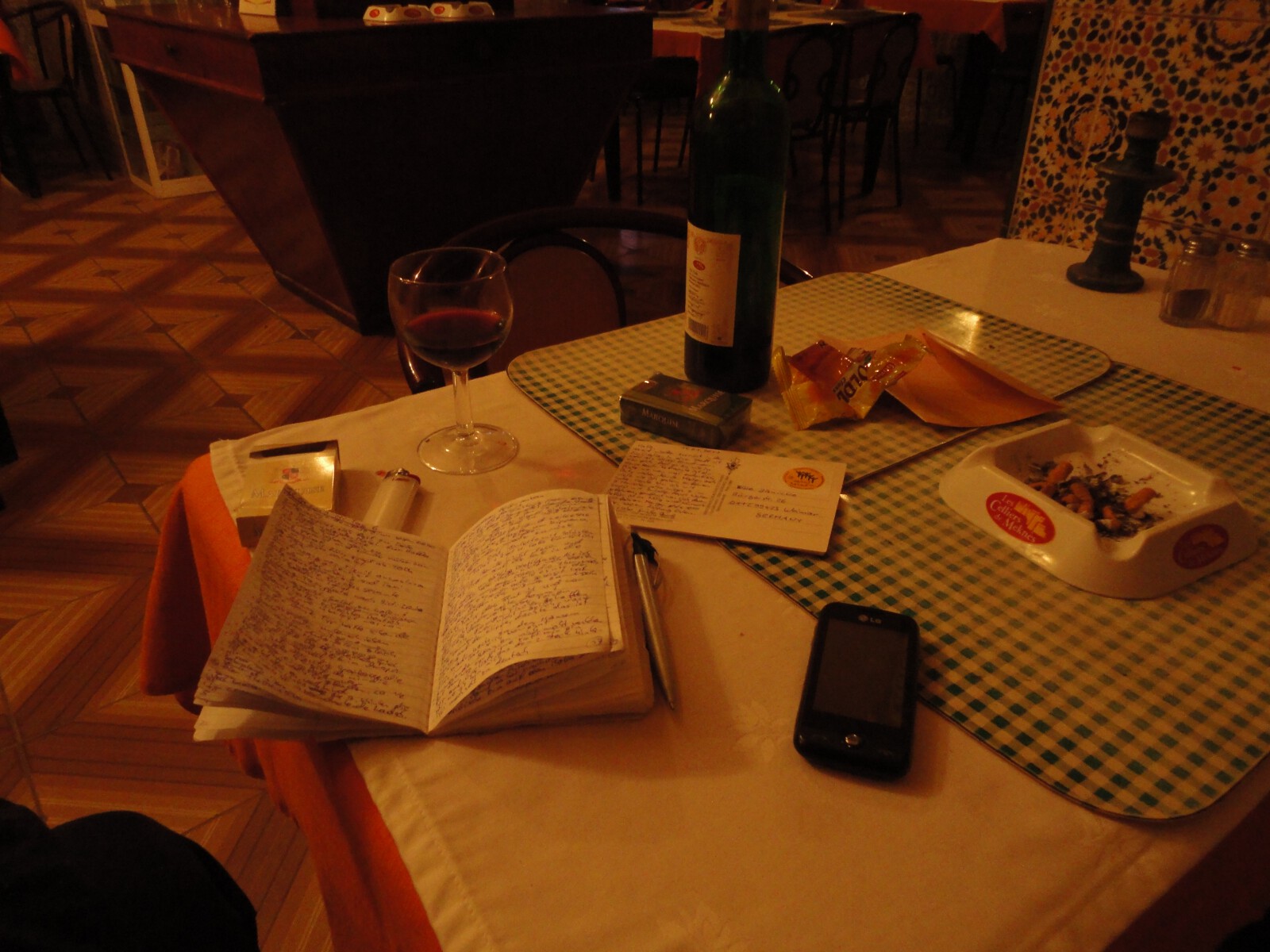 After sunrise, I made up my mind for the day. I grabbed my stuff and went down to pay. The hotel had a cafe on the ground floor. Breakfast was included in the hotel price. That was something completely new. So I sat down on the terrace, which was directly on a corner between the street and the wadi. There was typical coffee, in addition flat bread, jam and butter. I went comfortably on the further journey. I thought about finding a bus or a taxi directly to Taroudant. Meanwhile the sun was warming a bit more. After paying I finally went directly to the place where I got off the day before. Here there were some taxis but no buses. I sat somewhere in the corner and watched the whole thing for a while. Somehow not much happened.

At some point I asked a taxi driver about Taroudant. He made it clear to me that today nothing drives anymore. So no bus and no taxi. So I have to go back to Tiznit and then the same day further to Taroudannt if time permits. But I was confident, because it was far before noon and if not then not. At some point there was finally a taxi to Tiznit. I noticed that here is not really traffic. Filling the taxi with 7 passengers took another hour before we could leave. In the meantime I made it for me a quite anschprechenden Cafe on the terrace opposite the taxis comfortably . Sometime it was called Zid! Zid! (Let’s go!) from the taxi driver and the journey could begin. This time we drove in an old Peugeot, whatever make it was. The old device offered anyway place for 8 persons and luggage. In front of me sat a Grim Reaper.

I sat at the window completely behind. I tried in vain to make a few photos by the quite dirty panes, since the serpentines were quite respectable again. But that doesn’t really come across on photos anyway. Sometime there was suddenly a short break. That was something quite unusual with the taxi, because he tried to get to the destination as fast as possible. The woman from the very front had to vomit. In the meantime I stared around in the landscape until it was called Zid again! The trip with the taxi went much faster than with the bus the day before. That is also not surprising, the bus can take up the steep roads upwards also hardly speed. I suppose that went about twice as fast as with the bus. First I went through the valley again in the Antiatlas, hardly noticeably ascending. Then it went very steeply over serpentines upwards, further on a pass and then again downwards on sea level.

Arriving in Tiznit I also looked for the taxi stand to Taroudant. I found it right away, because there is always someone standing around and screaming loudly to draw my attention to his destination. It took about half an hour and the journey could go north again. After about 2.5 hours we reached Taroudant at a southern gate to this old city. The city was again typically reddish and surrounded with a wall and corresponding gates. In front of the southern gate there was now the bus and taxi station, where there was also a lot going on. The sun had not set yet. By some stupid idea I let a bus ticket for the next day to Ouarzarzate turn on me.

I don’t remember how I got there, at least I paid something about 80 Dh for it and got a little upset about my stupidity. What did I want with the ticket now, because it restricted my mobility. The next day the trip was supposed to start around 1300. I received again an ominösen small note on which the time, the bus driving company and the paid amount stood. I could have just found myself there the next day and continued with something at some point. But maybe the big detour of the day was a reason for it, which was not appropriate at all, because the distance to the east is one of the southern main routes direction Sahara.

I also felt a little bit pulled over the table, since anyone can issue such a wipe for money. But that should remain completely unfounded. Nothing comparable happened the whole time. So I went through the gate into the old medina of the city, which is quite worth seeing. Allegedly there is a much quieter and less tourism-like medina here than in Marrakech, but nevertheless with comparable size. I tried to orient myself at the LP map to see some hotels. After 10 minutes I got hopelessly lost, although the roads were quite wide and I had to try to go back the same way to start again. Somehow I couldn’t find my way at all through the narrow streets.

I had to look constantly, back, ask and everything again from the front. Of course there are no street signs and names, so I had to go to some hotels or shops where I actually am. This way I got to know at least something about the city, although it slowly got dark. That meant however only that still more humans were on the way. Sometime I had found some place and a hotel at that place. The hotel looked something like 19th century but quite nicely furnished. I certainly didn’t pay more than 100 Dh for it, but I only know that it was more expensive in Taroudant than before. Also here there was a common toilet and a common shower. My room, which I visited before of course, was a bit strange, but not bad. Basically it consisted of a small chamber with the typical big double bed and a kind of balcony in the direction of a medieval looking alley. In the room I felt like in the Middle Ages, but in Europe.

Fortunately there was electricity and left my devices around loading back and pulled out first times around me which to food to procure. I was again terribly lost, to be in the dark again 50 m on the place in front of the hotel. Next to my hotel was a higher priced one that had a very nice roof terrace from which one could surely overlook the whole city. I first sat down at a stand and looked into the pots of the food standler. Something pleases me, I pointed to it and got a bowl of a very tasty chickpea dish, so that I gesticulated and thanked the “host” for it. The whole thing had cost only 10 Dh. And of course there was tea again. After that I went on through the city again. I didn’t want to buy anything and just stared around a bit. There was basically nothing else than elsewhere in the country and I needed nothing.

I picked out an internet cafe and surfed the net for some time, answered some e-mails. Meanwhile it had become already quite late, but I wanted to make still my notes. So I sat down in a restaurant recommended by the LP for a bottle of wine. The pub was especially great. Everywhere colorful patterned tiles on walls and ceilings. In the television Al-Dschasira ran, so that I could supply myself after some time also times again with moving pictures from the world. Of course I could smoke the room as I wanted, no comparison with many other countries in the world. After the wine, which of course came from Morocco, I finally staggered back to the hotel and finished the day. At night I woke up a few more times by the loud noises of some young people who were somehow just quite loud. But I could not assign the whole thing correctly. 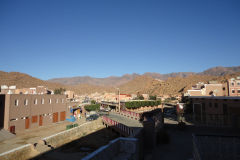 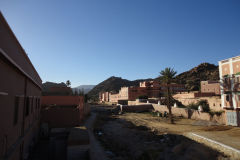 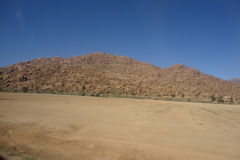 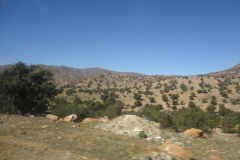 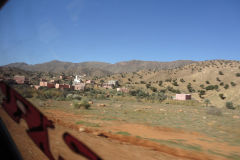 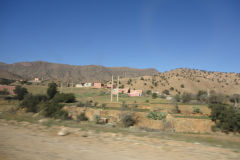 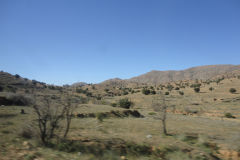 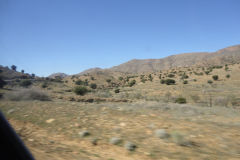 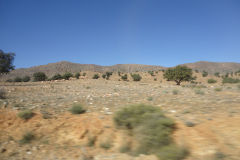 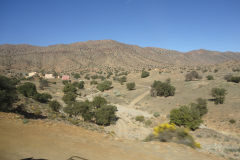 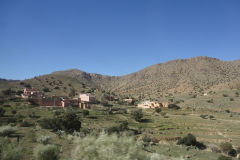 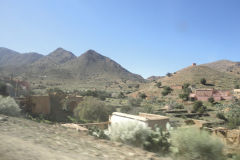 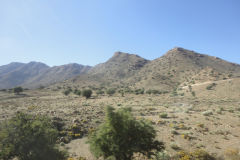 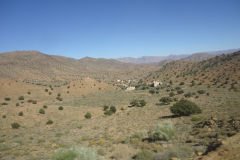 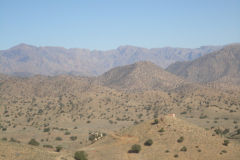 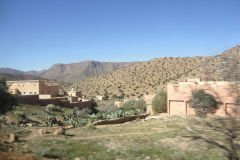 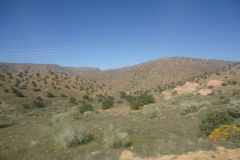 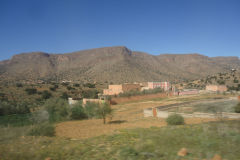 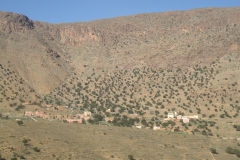 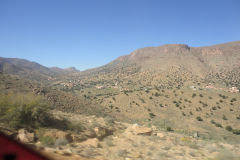 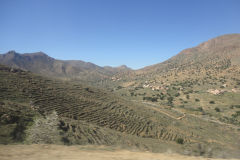 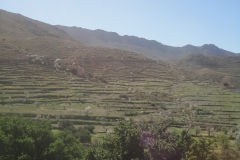 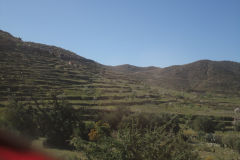 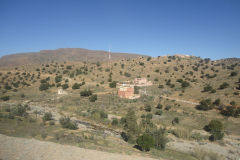