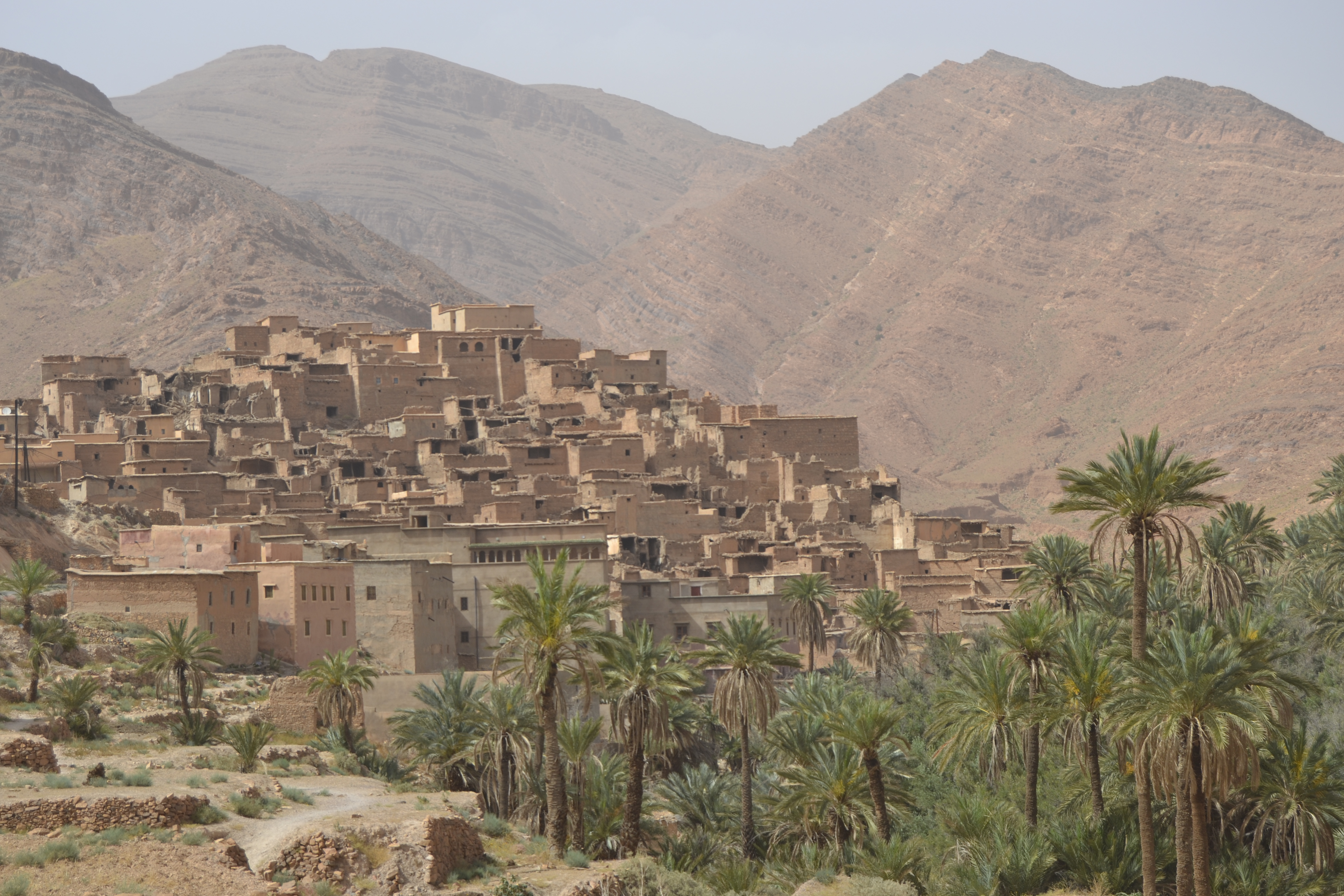 I tried to avoid them. That succeeded also quite well, however, sometimes so many appeared on a place so that I could not dodge there simply any more and had to fully through. Strange animals. We made a short stop and were able to photograph another one from close up. They don’t seem to be particularly fast. I researched the net later and couldn’t find out what strange animals they were. A turtle on the street offered some variety to all the insects. We stopped and helped the animal across the road. Not that anyone would smash the bumper on it. In Tiznit we stopped briefly at a gas station to refuel. The landscape only became interesting again when we came to the Antiatlas after some time. First still in small idyllic valleys it went higher and higher on a pass. Further down there were already the typical almond trees which should be above all later on. The route was almost free of cars.

An unbelievable driving what one has nowhere else in the world, as far as I can estimate. Before Tafraout we came again into a police control but had nothing to complain about. We had already thought whether they want to rip us off. In Tafraoute we first had to orient ourselves and try to find a hotel. We asked at the noblest hotel of the city, which is situated a little bit above and where always the tourists are. This was also the case this time. After negotiations they wanted to have 500 Dh, which we rejected for the time being. First we wanted to have a look around what else there is. Directly at the crossing to the other hotel was another one. The hotel had a cafe downstairs and looked a bit deserted, but otherwise very well maintained with a lot of love for details.

The room should cost also only about 200 Dh with climate. The receptionist said that there is no electricity during the day. But that didn’t interest us because we didn’t want to spend the day there. It was only shortly after noon and we had progressed very fast. We sat down in a restaurant where also some tourists sat. There sat one with a cap with the inscription “Mirleft – Never left”. No idea what that means. Somehow there has to be something not so obvious. After a short study of the map we had decided. M had read something about a typical Moroccan soup in the planet which should be everywhere and which she wanted to try.

They did not have it although standing on the map. My food did not give it somehow also. So we moved away again somehow angry. We wanted to go somewhere else in the city, whereby a guy on the moped followed us and constantly referred to some restaurant. We had no desire for such actions and tried to get away from it and not go into one of them. The guy gets a commission and we overpriced food. Something outside was a restaurant where there was nothing to eat. So back again. In the center was a quite respectable hotel with pool in the inner courtyard. Somehow it seemed as if the whole life of the city would take place there.

Everything was full of people and we just got such a place outside a tree. For me there was certainly Tajine again. But I can’t remember it anymore. So it was neither good nor bad. We asked at the reception for places of interest in the surroundings. They gave us the tip to drive into a valley. We didn’t feel like going to blue ground rocks, so it seemed quite good. Unfortunately, I don’t know exactly where it went. I just tried to reconstruct it on Google Maps, but it didn’t work. Somehow it went south out of Tafraout and then immediately the next road left into the mountains and always straight ahead in the big arc to then get back from the south on the same road to Tafraout. At the beginning the route was mediocre.

Later there were only two villages left which all looked completely dilapidated. So with classic dilapidated loam buildings. A formerly more prosperous town or village was classically placed in the landscape, but extremely decayed. It also didn’t look as if there would be many living there. An extreme difference between Tafraoute and the village only half an hour away. Later the road went down in serpentines into a narrow valley. Before that everything had been pretty much desert. A small stream also led down into the valley. Arrived in the valley there was suddenly an oasis like from the picture book, only halt in a narrow gorge.

There were also some few houses, which were stuck to the festival walls and which one could not see by the quantity at date palms properly. The small brook was dammed at one place, so that a small pond with clear water had formed. Some locals splashed in there. We simply stopped on the road at the edge, where already two other cars stood. The whole time we were there nobody came by with the car anyway. We looked something by the palm grove and at the pond and drove on. In some places there must have been high water before, because huge amounts of palm bushes were spread on and beside the road.

The valley dragged on for some time and was very varied. Some serpentines led finally again out of the valley on a pass and again down into wide desert. That must have been pretty much at the easternmost edge of the Anti Atlas. We came on the main road and drove again to the south. Farther east on my Navi no more roads were to be seen. Altogether this distance was to be looked also extremely interesting, particularly since we were again the only ones on the way. The route leads in the very east from Tiznit around the Antiatlas to the north in the direction of Ouarzazate through desert area. Actually I had almost planned to drive exactly this route from Legzira and avoid the Antiatlas. But that seemed too far to me at that time.

At a place where I had made this one black and white photo, we drove again west into the Antiatlas purely after Tafraoute. Here I decided to look already in thoughts whether there is a possibility on this road to drive north. Again it went up and down roads, although it was only 30 km. The landscape and the distance was extremely worth seeing. Arrived in Tafraout we went to the room and switched on the climate. Downstairs some had already gathered to drink some tea. We went with wine and beer in camouflaged containers on a higher terrace and ended the day. 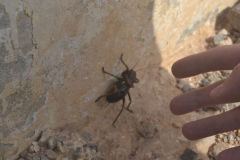 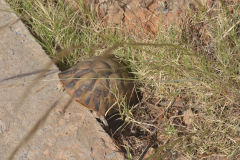 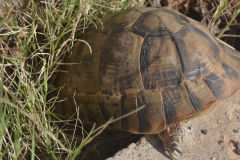 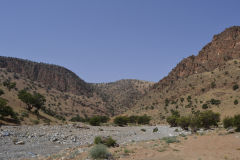 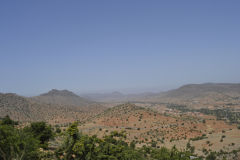 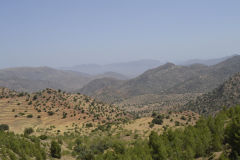 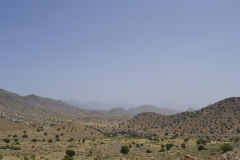 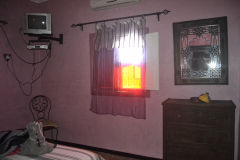 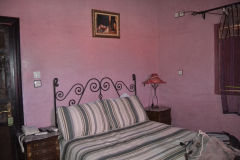 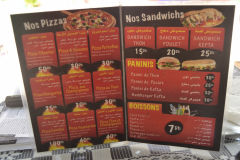 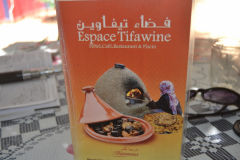 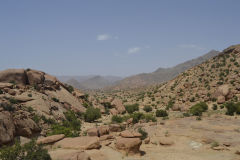 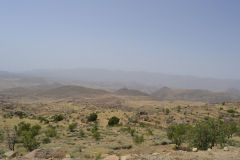 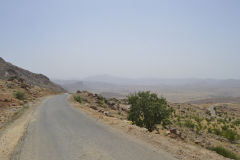 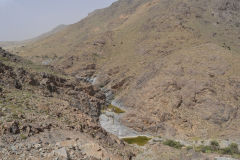 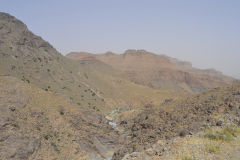 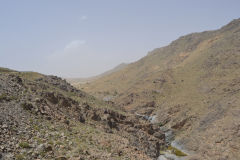 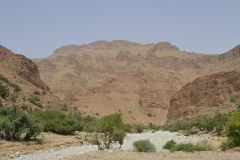 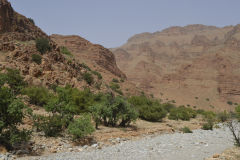 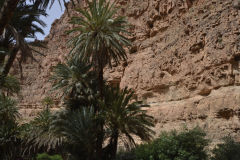 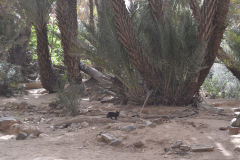 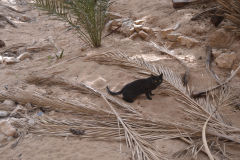 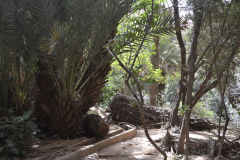 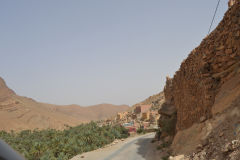