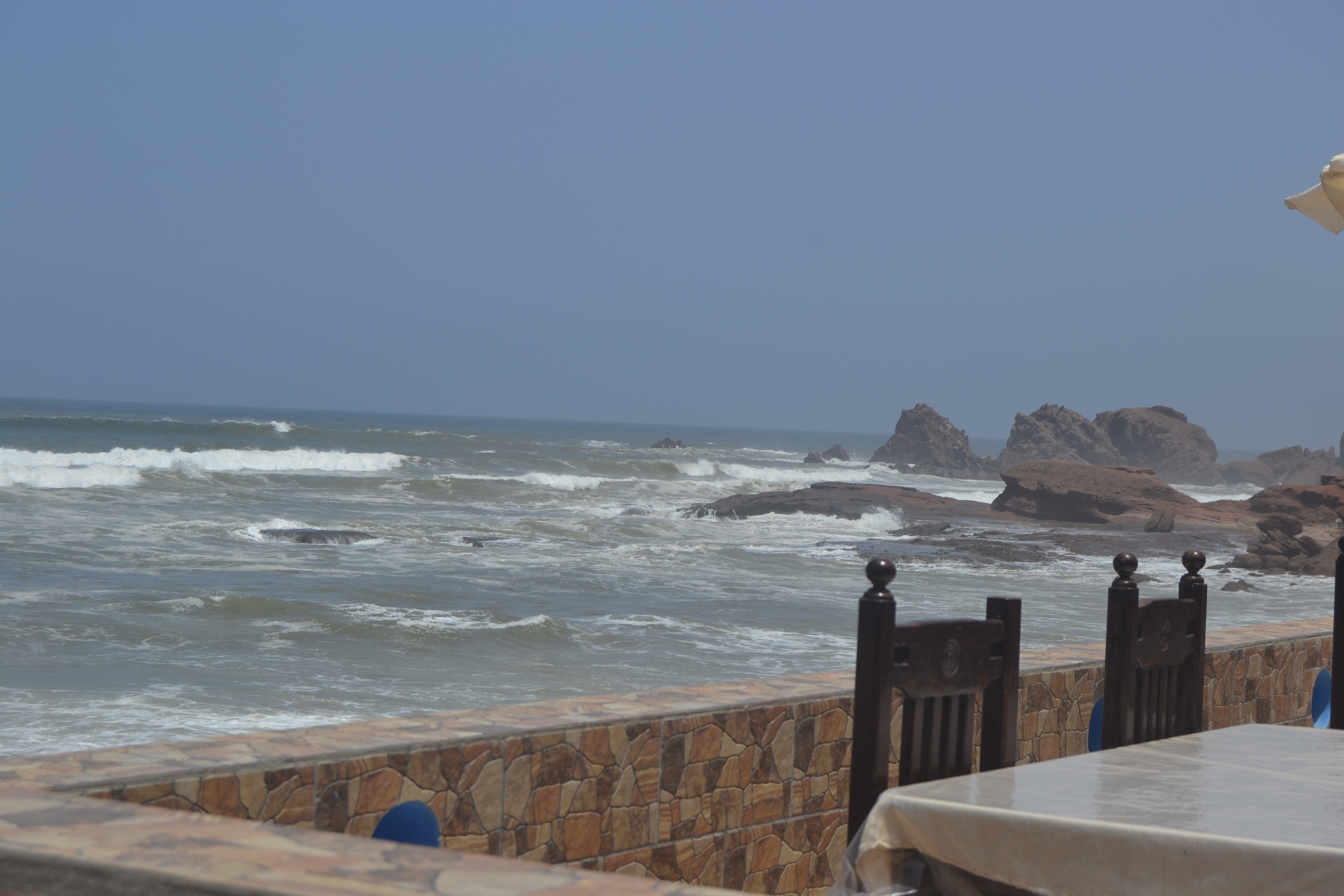 At the beach next to our hotel the snack bar had built up a pavilion where we had breakfast. Fortunately there were no other people there. Except some few fishermen and there were otherwise only one people from the hotels. Together we ate Omlette Frommage, bread, peanut cream, jam and some coffee with milk. Today we wanted to chill in the bay so we just went along the beach to warm up a bit. This time the waves were higher than the day before, but due to the low tide the sea was quite far outside. We lay down on the beach for a short time, although I don’t enjoy it at all. After 5 minutes I started to be interested in the washed up beach property. There where the waves of the tide had stopped was an edge like one finds it also otherwise in such a way at the sea with mussels and all possible other flotsam.

Here everything was colorful of plastic particles. I couldn’t believe it at first, but if you looked along the beach you could clearly see how colorful the whole alluvial edge was. The plastic particles were mostly approx. 5 mm² in size and in all colours, which were also quite strong. I couldn’t explain at all where this was supposed to come from. A successful photo also shows a syringe remnant. On the pictures you can see how colorful it is. The size of the parts indicated that they had been on the road for a while. However the colour decreases very strongly with the time if they are always exposed to the sunlight at the water surface. actually they should be pale if they came from far outside. In the height the current should go from west to east, because we were not yet below the equator. Also from south to north.

Probably the plastic particles came from a garbage dump further in the south, where they are washed up beautifully crushed further in the north to the beach. During my first visit in 2011, I had clearly not seen this. That meant at the same time that there had to be an enormous amount of it in the sea, when the waves already brought so much ashore. In one corner it looked even more colorful, because not so many people walk there and bury it in the sand. Due to the sun it quickly became warmer again. Meanwhile also a school class or something had arrived to the day trip at the beach. I retired to the terrace where I wanted to write a travel report under a parasol.

From the terrace the view was unbelievable, especially since nobody else was there. For lunch we drove back to Sidi Ifni to the market in a shabbier restaurant. In the more noble one next to it there were always some tourists, but I wondered where they came from. I ordered another Fischtajine, M. probably this time too. I also had the usual salad and tea. At some point a guy came out of nowhere and asked me something. Of course I didn’t understand him. So he grabbed my leftovers with his hand and ran away. If I had understood him, I probably would have even given him money.

What do you have to be poor to ask for leftovers at the restaurant? We walked calmly through this small hidden market and afterwards to the market at the airfield. There were mainly fruits, vegetables and nuts. We got quite inexpensive kilograms of bananas, oranges and some other things. Afterwards we drove back to Legzira, where I finally wanted to sit under my umbrella with tea. M went at present into the water, where also some others were. At some point I went there and went into the floods. At first a little more shy, later throwing me more daringly into the huge waves, the fun was quickly over when I lost my glasses. A short search did not bring anything, because the sea was simply much too powerful.

Fortunately I still had my sunglasses with me, which I hadn’t even thought of in the first moments. That should become later still completely interesting in the car and in the dark. We walked along the beach again. This time to the nearby right side. There are rocks and you can’t get there at high tide. Because the tide started slowly one could climb with a little bit on the rocks up to very far into the sea. I had seen there in the course of the day some daring ones jump into the sea. At the rocks there was also a small plateau. On the other side you could go down again and around the corner there was a new bay, but it was a bit smaller. But it was in almost complete loneliness.

We stared around a bit, because the beach looked so interesting there. Soft damp sand or rocky areas with all kinds of animals, rivers, lakes. Sometime when it got dark slowly we had to go back over the rocks. That was the only way. The sea came quite close, but we managed the problem with dry feet. Afterwards we went again on the terrace before our room around something to eat. I came on the glorious idea to ask hotel people for a candle. He gave me a candlestick instead of a candle, which was much better. As soon as the sun was gone it became cold again quickly. Unfortunately there was also this time again no real sunset, because fog came up again. 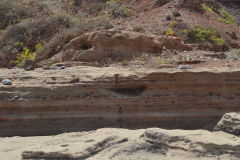 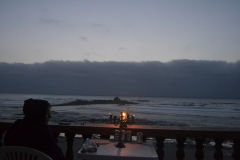 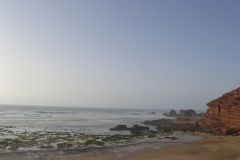 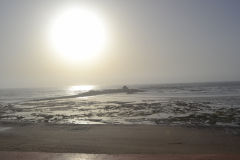 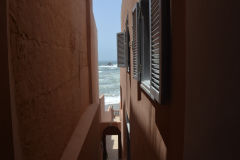 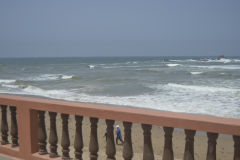 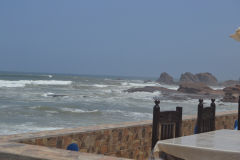 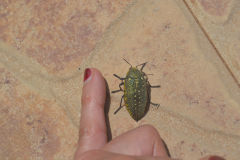 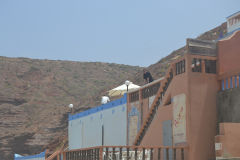 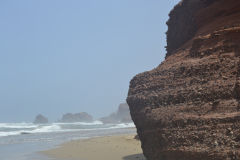 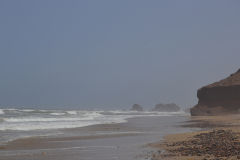 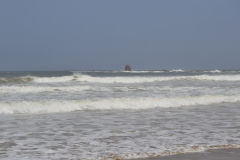 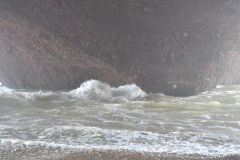 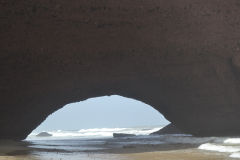 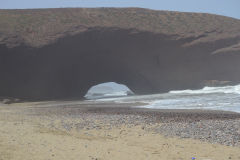 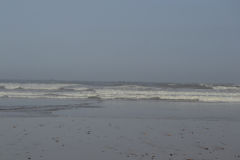 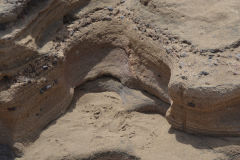 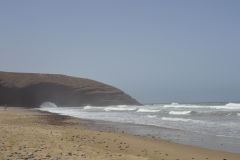 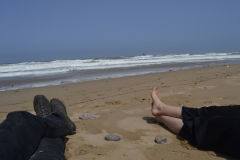 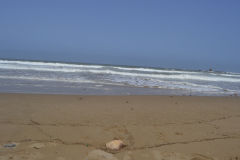 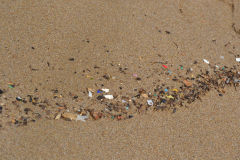 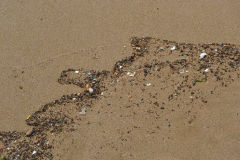 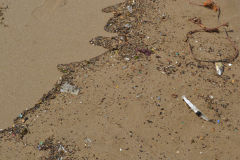 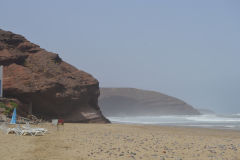