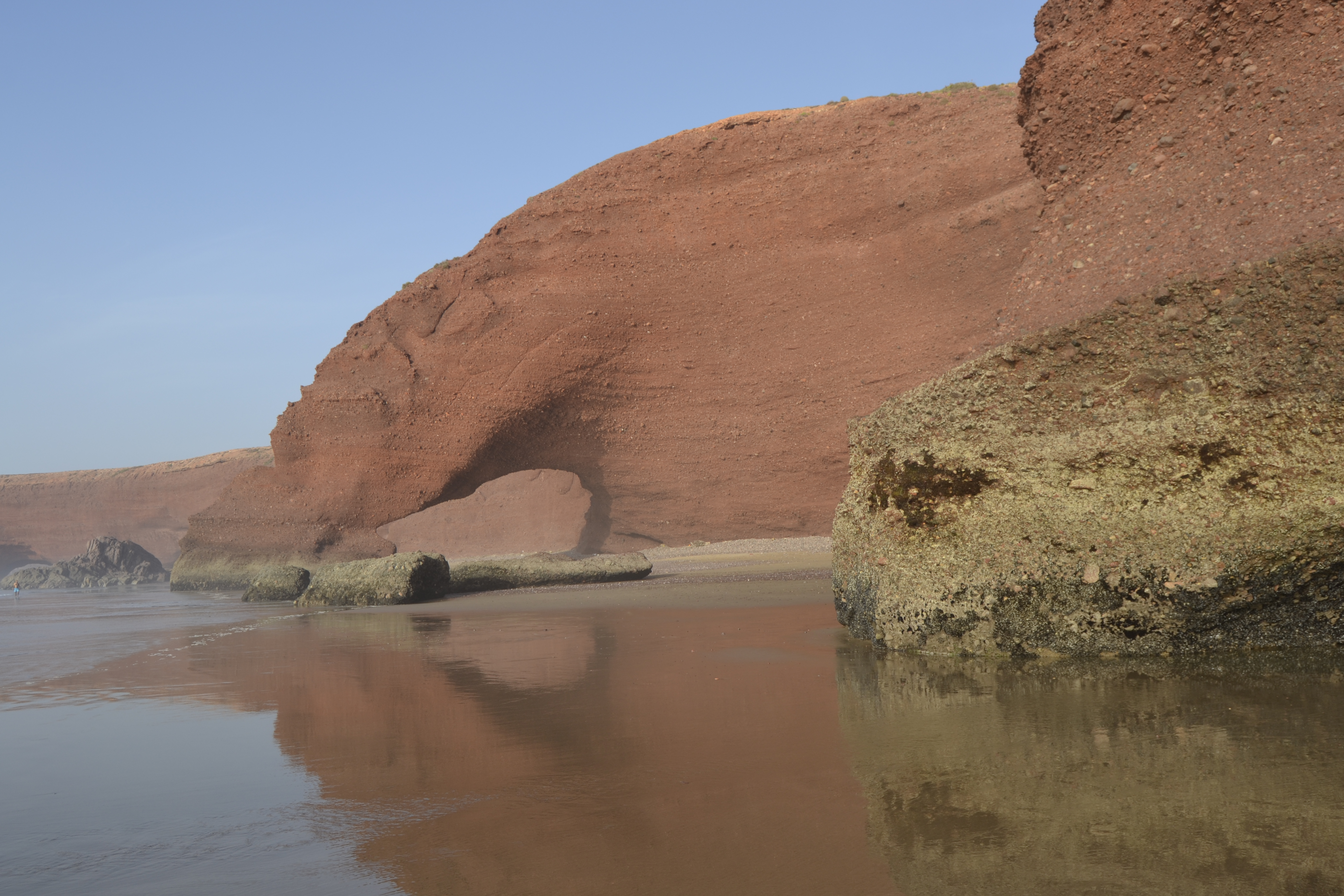 So you only have to leave the key and run away. The car park attendant got 20 Dh and we left this place. In Taroudant there is still a lot that is really provincial and as a tourist one is conspicuous there. But the Medina is a stark contrast to Marrakech, because there nobody is pushy and one can look at some things in peace. Otherwise there is nothing to see, but somewhere one has to stay overnight on the way to Legzira. We chose the road directly to Agadir to get beer and wine in the strange shop described in the Planet. A small can cost 13 Dh. I was about to leave when such a parking attendant wanted to relieve me for money. First I did not want to pay and simply drive. The person was persistent however and actually we had a good parking lot directly before the business, so that I gave him nevertheless 5 Dh.

The traffic in Agadir was terrible and altogether it was a huge detour. In Agadir itself there is absolutely nothing to see. The road in the direction of Tiznit was at the beginning often two-lane, later no more and with building sites broken through which apparently eliminated the preceding damages of the preceding rain. At a small crossroads coffee shop we stopped at a restaurant, sat down on the terrace and ordered two tajines. I one with something that later turned out to be ribs of something, M one with beef. We had tea and salad again. The whole thing cost about 70 Dh. Directly beside the terrace bread was baked in a wood stove. In a late afternoon next door I got some toilet paper, because there was always a lack of paper.

On the further distance I drove more and more like the locals and overtook ruthlessly on traffic signs. In a construction site I overtook a slow truck, which some vehicles had already done before us. After a few minutes we got into a police check where we were pulled out. The more important guy spoke only French, whereupon we made it clear to him nothing to understand. Then came another guy who could speak English. The slimy bull made us clear that we had overtaken in the overtaking ban and therefore 700 Dh would be due. We protested and said that we had done nothing and had no money. He wanted to keep his driver’s license which of course didn’t work.

We paid grumpy and I changed my driving style in the most rule-compliant way possible. By the way, this is not possible at all, because the rules are often unclear and you become an obstacle for others. After paperwork we could go on. These dirty cops rob you of 700 Dh for an offence that is done there constantly and cannot be paid by any local.

The slimy bull had no change at all and we were probably the first of the day to bleed, whereas locals got away with a pack of dates or something. I thought at first that we had fallen victim to the highway camp, but I had really committed the offence, just like every other local does it all the time because otherwise nothing would go forward on the non-existent roads. Up to Tiznit the road was without much change, only the vegetation became more and more sparse. In Tiznit I stocked up again with cash from the vending machine, because I didn’t know if there would be an ATM in Sidi Ifni. To the best of my knowledge, this was not the case in 2011. Later I saw one. But that doesn’t mean that it would have worked.

The stretch from Tiznit was a bit more interesting to drive, as it first led curvy through smaller hills and then in sight to the Atlantic Ocean through a landscape colored red by a plant away. We made a short photography stop in Mirleft, which is supposed to be special somehow. Later in Tafraoute a guy sat in the restaurant opposite us with a cap and the inscription “Mirleft – Never Left”. Since 2011 an extensive building activity has taken place above Legzira, so it was quite easy for me to find the place again. The stone with the pale inscription as a sign to the beach had disappeared. But before that there was a newer sign, which I couldn’t quite make out on the fast one. The way to the new buildings was tarred but down to the beach was still the old runway. The new buildings are supposed to be holiday homes. When everything is fully booked, then the beach has been eaten.

We parked the car directly behind the hotels and went right into the first hotel, which is also the third from the left. The hotel man wanted 400 Dh for a double room. We wanted one with a terrace but it was not really there. With this hotel a really clever person must have planned to omit the terraces. We said we’d take a look around and go. To the left was the Beach Club. Both hotels looked completely empty. The hotel man from the Beach Club showed us some rooms with a terrace and we decided for one on the second floor. The terrace did not belong to the room, but bordered it directly. Since we were alone in the hotel anyway, we only had them for ourselves. The room is like all other rooms in Legzira Beach barely furnished. Small room, small bathroom with warm water, but not always warm, bed, old wardrobe and a socket.

The electricity situation improved for the last time, because there was always electricity. But that also had a huge negative effect. When the generator was switched off, there was an incredibly clear starry sky. Now all possible terraces and houses were illuminated, which destroyed it already times completely. The hotel man wanted to have only 300 for the room. We acted down to 250. In view of the almost non-existent comfort a quite high price. But the view and the lonely bay is worth it. We parked the car directly behind the hotel so that we reached directly over the back entrance and packed our things in the room. At that time the temperature was about 27 degrees.

What I had noticed before was that the sea was quite far away at low tide. I didn’t remember it that way. At that time it was low tide with the lowest level around 1900. The waves went in height of the rocks opposite the beach. On that day there were relatively many locals for bathing on the beach. But there weren’t really many. We went for a walk through the arches and at the end we were alone again at the end of the beach. There was a lot of garbage everywhere. When we returned it soon became dark and there were only a few people left.

Some fishermen collected and fished something from the low tide. We went to the snack bar and ordered a sandwich to take with us. The thing cost 30 Dh and was not very well done, takes some time, but was good enough for two people. We sat down with beer, wine and the sandwich on the terrace and stared into the not right sunset, because the sky was cloudy on the horizon. Meanwhile the tide had set in and came very quickly closer to the hotels. The air became cloudier and cloudier due to the constant and ever approaching surf, which became even clearer by the cloudy glow of the lights.

Somehow the volume of the sea seemed much quieter to me than the last time. No loud thundering, no vibrating of the house. At some point we ended the day without having a really beautiful starry sky. 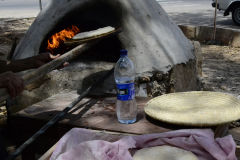 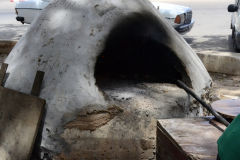 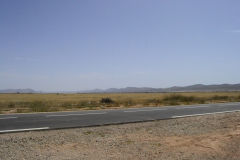 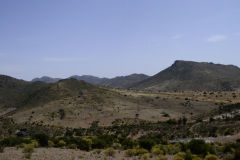 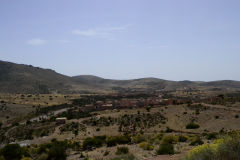 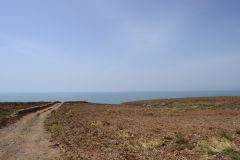 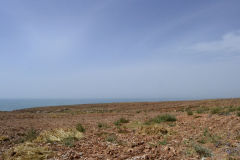 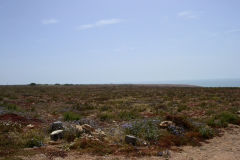 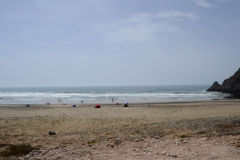 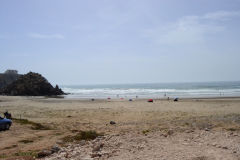 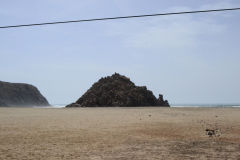 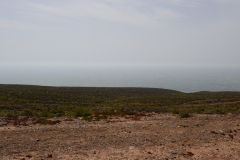 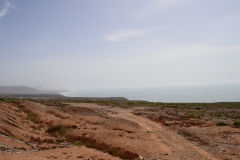 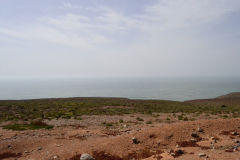 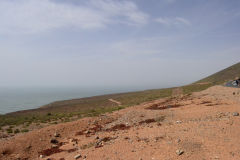 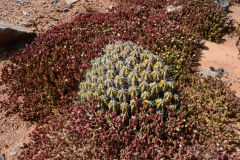 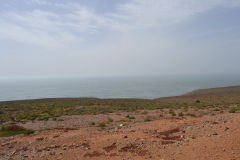 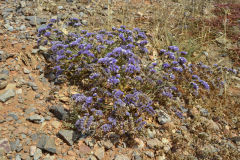 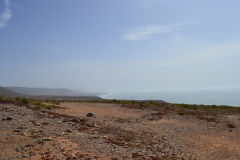 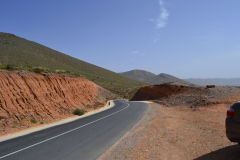 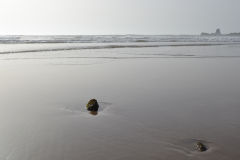 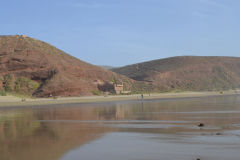 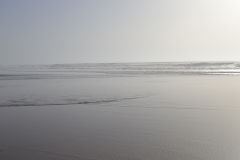 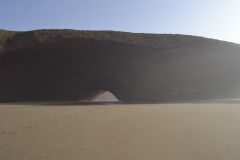