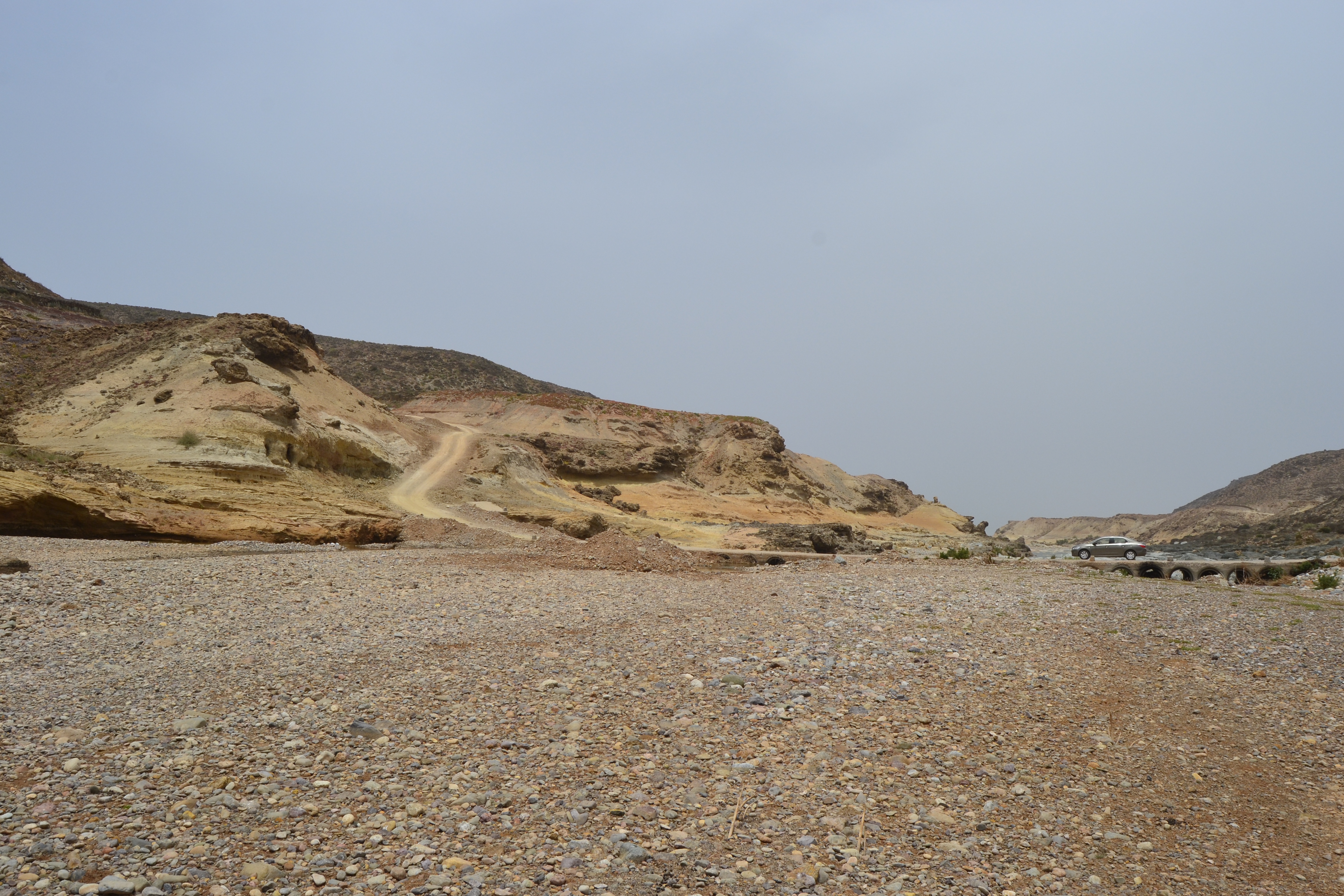 We started immediately with the car to Sidi Ifni and looked for a restaurant directly opposite the old airport. As always I had Omlette Frommage and Cafe au Lait. We could park the car comfortably around the corner. Next to us sat one who ate bread and oil for breakfast. This is probably the original local breakfast. We went briefly through the small town to the walls and ordered the same again in a restaurant. Before two tried to talk to us. First creeping up, then hello and where we came from, then trying to shake hands and somehow wrap one up. I already know that and did it with pure ignorance. This constant chatting and hand pressure doesn’t work at all.

This has nothing to do with my rudeness, but with those who try to sell me something. I know what I want and especially this aggressive kind of advertising I can not stand. The Omlette cost this time 12 Dh and the coffee 10 Dh. With the topic Omlette I must make an excursion immediately still, because I ate this every morning. With the Omlette Frommage I got to know six different variations. 1. omelette and one or two pieces of wrapped processed cheese separately. 2. omlette and one or two pieces of processed cheese placed in the omlette. 3. omelette with pieces of processed cheese. 4. no omelette, but a fried egg with all three previous variations. But these are only the main variations. There are still some with or without cumin, cutlery or salt.

Some also ask how many eggs they should be, or the number simply differs. Typically Omlette Frommage cost between 12 – 16 Dh and always contains bread. From time to time olives are also served. The most expensive Omlette was 20 Dh shortly before the Dadess Gorge. After the coffee we went after another small round by the city back to the car to drive further in southern direction. The map in the planet was not quite right, because we only came to the harbour with the road that passes the former airport close to the sea. At the harbour huge breakwaters were produced. In the fog one could recognize also a kind of bridge over the cars drove. Probably the actual harbour lay further in the sea in the fog. However, one saw absolutely nothing except a guard at the beginning of the bridge so that we did not continue.

The harbour was important for the local fishing fleet during the Spanish occupation. We drove again towards the city and along the other side of the airport to get to the south. After some time we stopped to go for a walk on a mountain. There was no traffic at all. On the side facing the sea there was a barren field with perhaps barley on which a donkey stood around and from time to time there was a sound of itself. Otherwise nobody was to be seen far and wide. Strangely enough the donkey didn’t move at all the whole time and just stood around stupidly. Actually he could have run away, but he didn’t do a millimeter either.

We walked uphill through ever denser thickets of cacti, thorny undergrowth and spurge plants. After a while this was too exhausting for us because everything was too densely overgrown and it was hardly possible to get through. The cacti did not stand around senselessly in the area. One could clearly see that every single fruit of the last year was harvested and hardly any were to be found. There really people must go through and the harvests. When we went back we discovered a strange insect that I couldn’t find net like that. It had six legs, no wings and was about the size of a pack of cigarettes. At first we got a fright because of this huge insect.

The next day there were hundreds of them on the route between Legzira and Tiznit, which crossed the road and were often run over. I would have liked to know what kind of animal it was. Afterwards we drove like the road further to the south until we couldn’t go any further. I don’t know how long we drove, at least the landscape became more sparse. There were actually no more villages. The road ended on a big bridge which had been washed over once. On the other side there was only a bad road where you didn’t know how long it would go. Beside the bridge there was a signpost to a restaurant on a beach that had to be far away. Also to this restaurant in the middle of nowhere there was a single track along the slope which looked very adventurous but was used by three cars during the time we were there.

Apparently this was a very special restaurant, as it seemed like the end of the world and the few cars drove there. I thought about going there, but it seemed to be too risky because of the terrible road. I wouldn’t have imagined what would have happened if a car had come towards me and I had to go backwards. We went for a walk in the wadi and drove back the road. Meanwhile we got hungry and went in the market of Sidi Ifni in a small stall something to eat. We decided for the shabbiest stall, which was directly opposite the entrance. Interestingly, there were quite a few tourists on the spot. M. chose a few grilled fishes, which were grilled opposite at a stall. The fish were a kind of sprat. I chose a tajine with fish. In addition there was Moroccan salad and as usual tea.

My fish tajine was excellent, but I don’t know what kind of fish it was. The sprats must have tasted quite good, but I didn’t try them. In total it cost about 70 Dh. We drove back to Legzira after we had bought some flat bread, mortadella and processed cheese. The Mortadella I had bought there for the first time and should accompany us the whole further journey as the only sausage. This has been a strange stuff. You don’t need to cool it and it’s available at every late hour in the desert. It never gets bad, it just dries out. And that so fast you can almost watch it. The sausage was available as classic, hot with paprika, with olives and with cheese. Somehow it always tasted like cardboard, but was a change from the constant flatbread with cheese or fruit.

There was nothing else for on the way than Stulle except from the rare supermarkets. In Legzira we walked around on the beach for a long time and afterwards on the terrace for dinner and after sunset, after which it became quite cold again and the sea came closer to bed. 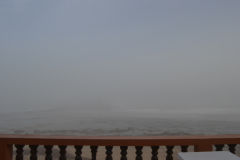 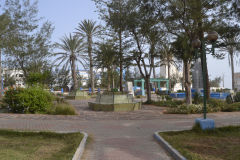 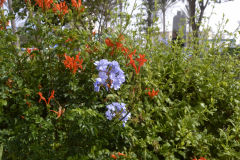 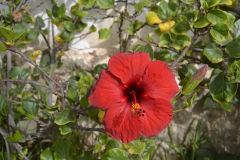 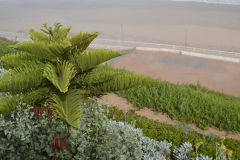 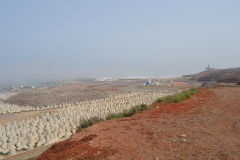 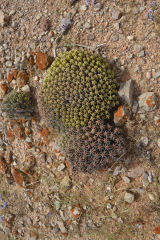 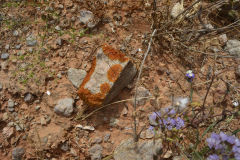 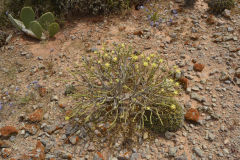 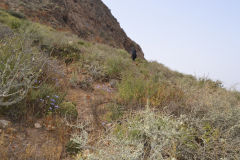 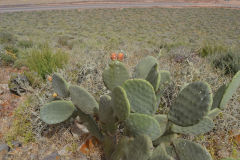 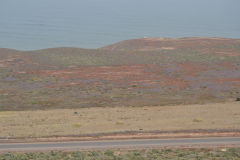 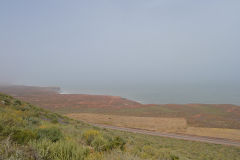 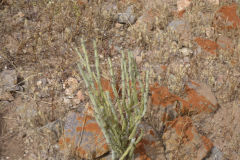 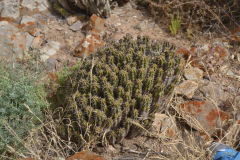 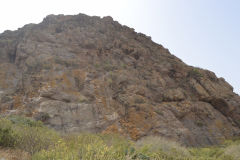 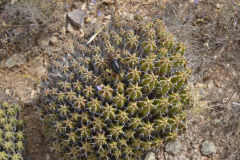 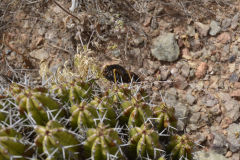 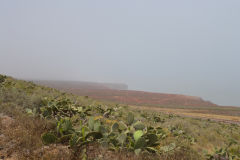 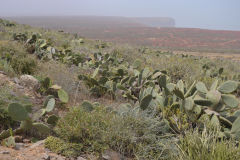 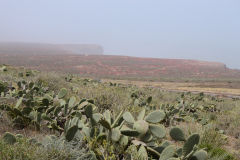 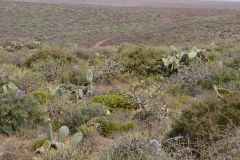 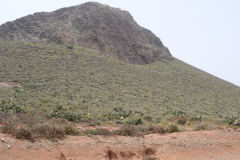 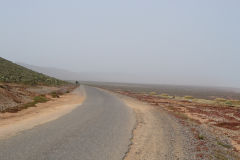