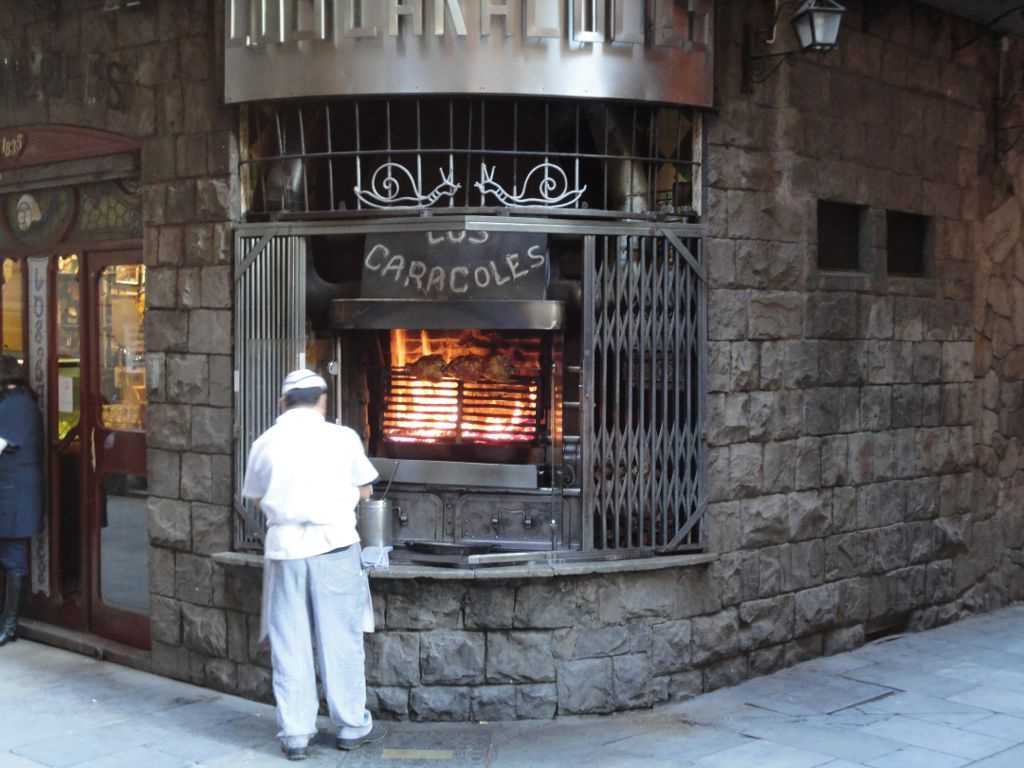 After half a cigarette and a chat I went to the airport Karlsruhe Baden-Baden. In between some entertaining conversations. After 40 minutes we were at the FKB as planned. After a cigarette we went to the airport to check when and where I have to go. After the statement that the airport is very clear and I do not need much time to check in, I went out again for a cigarette and then 0815 to the check in. Of course I Depp had packed my hair shampoo, for whatever reason. That went immediately times compulsorily into the garbage. Not so bad, because there was not so much more in it anyway. Normally the following metal check takes place without beeps, but my new two hooded shirts, which I had put on because of the cold made a perfect passage nullified. Next time I know that and they will be pushed through the scanner to avoid annoying touches.

Then I checked the situation at the gates and found out that there is also a duty-free with the usual stuff and a coffee. Unfortunately, I had noticed before that I could not withdraw any money with my new credit card because the new number is not yet there. From the money card of my main account I already forgot the number one and a half years ago another account rarely has money on it. There I stood first of all with only 10€ cash there. For some reason I had taken my remaining dollars from my visit to Detroit with me before. However, the bus from Girona to Barcelona should cost 12 €, which I wanted to raise with the change of the dollars in Girona. Everything else was to be seen then.

Fortunately the FKB at the gates offers the possibility to smoke outside. Unfortunately FFM has no more possibility to smoke at the gates. Gradual intensification of repression against smokers. The gate was full, but not as full as the gate where people were supposed to fly to Antalya later. I sat down at a gate next door, where you can see the call and how many people are waiting. Of course people jump up when the gate opens and line up in an immense queue. I always wonder what this is all about. The people stood there partly 15 minutes, which they could have done also sitting with an occupation, in order to be able to form a short queue completely civilized. I stayed seated as long as I could and played around with my mobile phone settings and read emails. As one of the last 5 I am comfortably at the switch and also directly through without standing stress. That also had the advantage that I escaped the snake at the entrance to the plane and could immediately sit on the next free place of the Ryanair to Girona.

The free space between the seats was bigger than I had thought. That was just enough that I could sit down without being able to move. Two centimetres tighter and I would have had to sit on an emergency seat. At first nothing went for a long time, while outside it kept snowing but nothing stayed right. Anyway, it was white, the first snow for me for this winter. After the one from the evening before. Then followed 0130h unspectacular flight. Only the unexpectedly hard landing had surprised me somewhat. Normally the airplane goes down fast over the runway, remains some time over it and goes down gently. However, the pilot has touched down without the gentle transition phase. Interestingly, there were also some gossips after the landing. Strange.

When we got off it was the same as at the gate, only stupider. Even before the seatbelt signs were off, the people jumped up and took their clothes and then stood around in the corridor forever. This behaviour is inexplicable. Without bus and passport control we went the 200 m to the exit. Very relaxed. Now the problem with the money for the bus had to be solved. The airport had of course no exchange place, where I could have exchanged the dollars in euro. My hopes that the ticket office would accept credit cards were shattered by the widely recognizable imprint “No credit cards accepted”. My last emergency solution had to be done and I had to have something transferred to my unused account. After a phone call in DE I was able to do this within 15 minutes, so I was the last one to get on the bus. The next one would have left three hours later around 1415. That was also not a bus but 5- 8 buses. But no matter.

The trip was unspectacular but scenically moderately interesting, as in contrast to the start in DE the sun distributed its magnificent rays without clouds. After about one hour we reached the bus station Barcelona North. This is always the moment of greatest bearing when one stands around in a big city in an unknown area. First of all we follow the crowds of people, of which there were really a lot. Briefly stared into the lonely planet and roughly headed towards the sea. That didn’t really work out yet, which led me through the nice and narrow alleys of Barri Gothic. But I didn’t want to go through without having a starting point with bearing. Somehow it went very fast and I was at the harbour.

I went a little bit to the south, but not too far to not go into La Raval. Then again towards the city through the alleys of Barri Gothic. The quarter can’t be compared to any other quarter I’ve ever seen. Here the medieval substance is really still preserved and makes by the narrow and essentially untraveled alleys the appropriate feeling to it. Numerous small shops with all sorts of different things are everywhere. In addition, there are numerous restaurants everywhere, but I did not want to go to them, as I am not a luxury tourist here. Barcelona is an expensive city and here one gets rid of a lot of money if one wants or not. The prices at the signs of the restaurants were mostly between 10 and 30€ in the Barri Gothic.

Which I didn’t deliberately pay attention to, and that’s not representative. For the first visit in the district there is a lot of variety to see. At some point I got to the famous La Rambla. Somewhere in the middle. I actually wanted to follow a route from the lonely planet, but I missed the starting point. So first the Rambla down again towards the harbour. The road seemed to me already after few minutes as tremendously boring. I don’t know why the people walk around in the middle of it. There is simply nothing, at least for me nothing to see. The only positive thing were the cigarettes, which I could buy for 3,56 € at a newspaper stand. So I turned around in front of the harbour and went up again. At the Correra Hospital I went straight to Raval.

When I saw an interesting backyard I went in to rest under palms and orange trees. By chance I had landed at a place steeped in history, which in the lonely planet is called a place populated by bums and pausing students. I didn’t find it that bad there, but rather very comfortable. Maybe it’s more intrusive in summer. Through the hospital and then straight on to the west or a little crosswise through Raval. While running through I suddenly stopped because the books subconsciously drew my attention. The shop was something like the headquarters of the Federación Anarquista Ibérica in Barcelona or something like that. I didn’t keep myself busy because I don’t speak Spanish.

Further through Raval, which didn’t seem as weird to me as when you were dropped off in Alexandria in the dark in the evening in some neighborhood where it is burning on the street, hardly any light and everything very crowded. At some point I passed a street where there were numerous music shops. About 4 pieces in a row. One had Metal, the other Rocknroll again the next mixed stuff. Especially in Spain there are people who buy CDs and records instead of just sucking them. We continued across La Rambla to Barri Gothic. Numerous winding little lanes with many small shops and pubs await the inclined visitor. The restaurant in which Picasso supposedly often stopped is passed and still crosses the Barri. At a stand on La Rambla later bought a sandwich for 8 €. It wasn’t worth it but I could have bought something else somewhere else. Then I continued the road and the extension north to Gracia to check in at the hostel.

The hostel was located on the Diagonal on the first floor of an apparently Art Nouveau house. It was only 18.00 o’clock and I went into the lounge to surf the net. At the same time I got to know some others. There were many Americans from different regions, an Irishman, a Brazilian Portuguese and three Polish women. I don’t remember who else was there. The whole society was also quite strong on party. In 1900 the reception was transformed into a bar. 2300 we went out to a drinking hall. I would call it a drinking hall, it was probably just a huge bar. Interestingly, there is in Spain for some years a smoking ban in bars bigger than 100 m². At least they must make an extra room for smokers. Apparently I was the only one who stuck to it. At least I noticed later that there is smoking everywhere. Sometime I was too finished and tried to come back with the Metro to the Diagonal. But the train didn’t run anymore. So I took a taxi and shortly after getting on I realized that I didn’t really know the destination. I told him something about St Juan with a basilisk. He also drove me to a basilisk, which cost me about 10 €. After getting off I noticed that it was not the basilisk I wanted to go to. So I took another taxi to another basilisk. That had cost me 6 Euro again. At this basilisk I noticed that it was on the diagonal and I only had to walk in the right direction. After some time I also arrived. 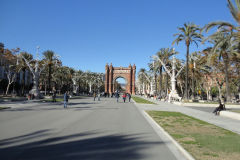 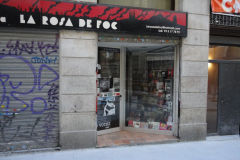 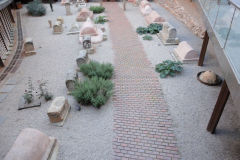 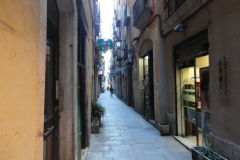 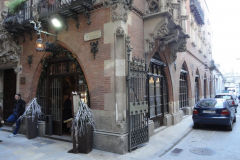 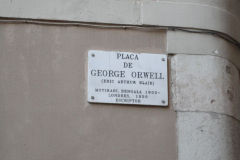 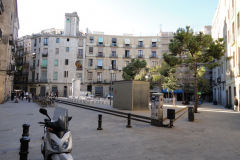 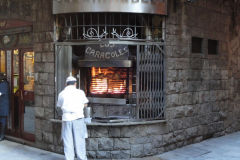 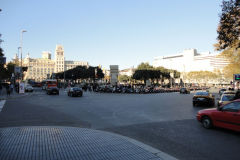 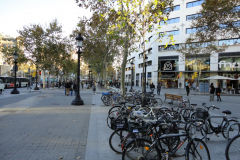 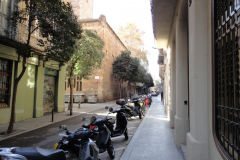