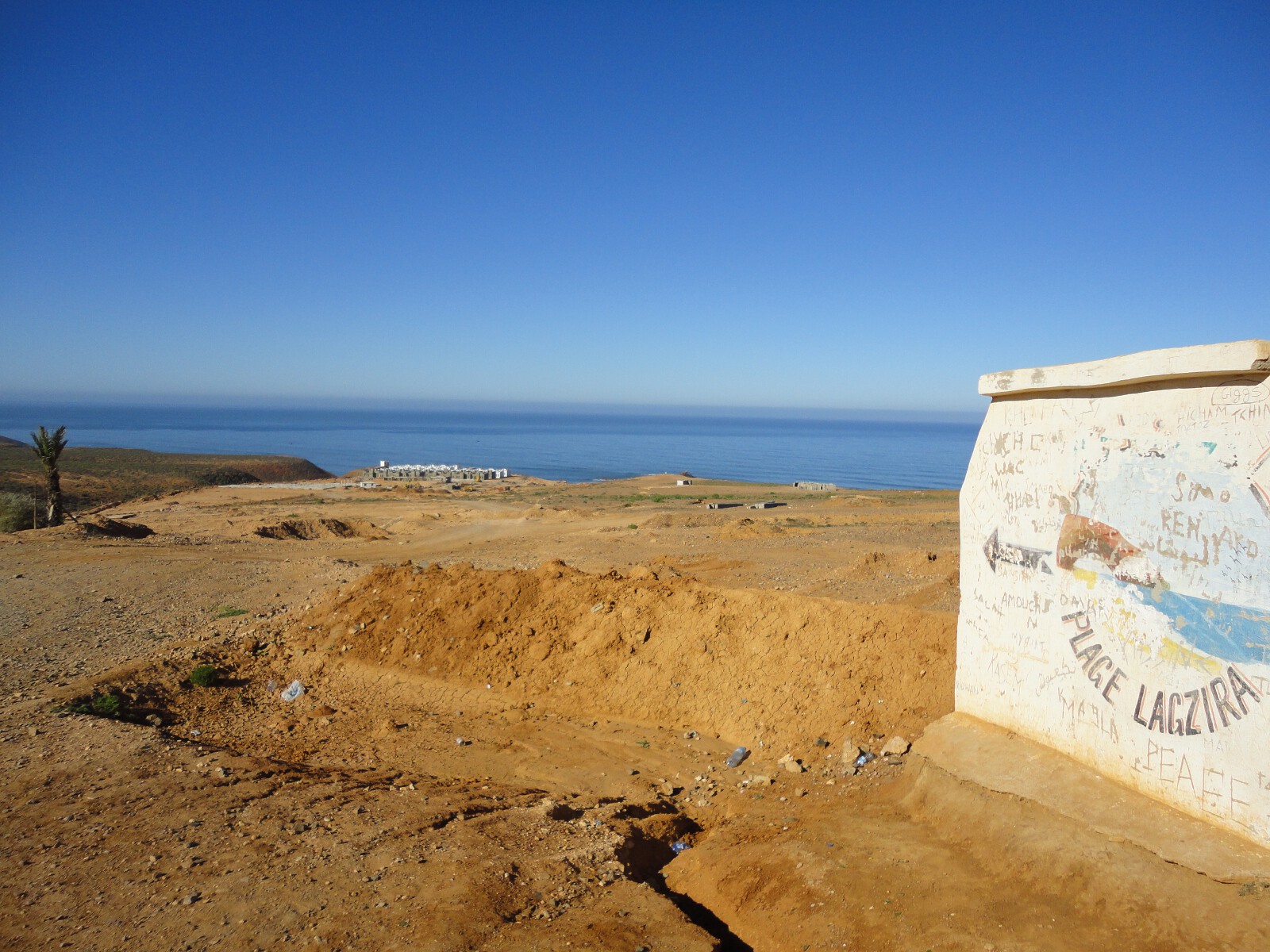 I hung the clothes over the balustrade of my terrace to dry in the sun. Then I asked the quite young hotel employees how I could best get to Sidi Ifni. I spontaneously decided to spend another night here. I was told that there was a bus on the main road. So I went without food to the main street and took the first picture where you can clearly see that nothing else is visible. After some time the Italians came and I talked to them until a bus actually passed by. The bus cost 5 Dh to Sidi Ifni and went to the “bus station”. That was a huge place without anything. Meanwhile it had become quite hot. I had expected this but didn’t think so. Beside the big square there were numerous cafes but already no more in a touristic style.

I could see that the city did a lot to make it look touristy, but still everything was quite rural. Apart from the street next to the square, everything seemed to be quite original. But everything in total had nothing to do with Marrakech, Essaouria or Agadir. Rather it was a better Inezgane with sea and still some French pensioners. I walked for a while through the quite small center of the city, which was close to the big square when I finally saw some mopeds standing in front of a shop. Spontaneously I asked what such a device should cost to rent for one day. Here a language barrier opened for the first time, as English didn’t help here at all. Fortunately there was an English and Arabic teacher next to me from the local school. The whole thing should cost 12€ per day.

Without thinking I agreed and talked briefly with the teacher about the problems in his school. No pens and leaves were his main concern. I had to make a copy of my passport and went to a “copy shop” around the corner where I saw an internet cafe. I made some more copies and went back. Meanwhile my moped was tested and filled up with red gas from plastic bottles. I didn’t know where I wanted to go and that’s exactly why I had a 2L-bottle with the fuel as reserve buckled onto the carrier. After payment and a short briefing I started. I had never driven a moped before and the start caused some problems, so that I had to run quite far until I understood that with the choke and throttle etc. had given. Later it should go to two meters.

Before I drove off the lender pressed a helmet into my hand. I refused and he strapped the thing to my moped. So almost all drove through the area and at least you should have one I understood him. Later I noticed that already so was true. Nobody had a helmet on but he was almost always there. I lit a cigarette and drove first by the city center and somewhat further outside around around the vehicle to get to know which max. approx. 50 kmh brought. I drove direction Legzira north out of the city and stopped left at a snack stand because I had not eaten anything yet. The snack stand consisted of a transparent tent and a hut. Also here my English did not go on and I grabbed to my LP French and made him understandable that I would like a snack. The only thing I could assign correctly was Omlette and that was also exactly correct. I ordered a tea with it.

The tea came immediately in a pot and somehow I had already incorporated it to pour the tea from high arches into the glass. I thought it would be a bit idiotic, but that’s the custom. In addition there was also a 100g block of sugar from which I only took a little. After a short time the Omlette came in a pan. That was about three fried eggs with a few corners thrown in processed cheese. Just right for me. Inexpensive and tasty. At this place I was anyway quickly entourisiert. 1. no more English (later only Arabic helped), 2. the high pouring of the tea and 3. what should be constant later: no cutlery! To the omelette there was flatbread, with which I tried to get the burnt egg from the pan. I’m not so squeamish about it, so it went quite well at some point and tasted great with the tea.

Later I was supposed to eat it almost only and after some practice it worked quite well without cutlery. You don’t need that at all, it only costs water and it doesn’t happen in the desert. I turned around again and drove down the small mountain to close to sea level and this time to the left along the road out of the city. On the left there was a wadi and on the right there were smaller hills. Buildings were no more to see. For a short time I decided to leave the road to drive up a dirt road at the hill on the right. The way was well driven out, so that I needed only little effort to get up there. At the top there were some small houses that were supposed to be a farm. On the left there were numerous cacti. The farm was inhabited and a dog barked from a distance. He didn’t dare to get close.

I let the engine also run and looked only direction Sidi Ifni, which spread below direction sea. Here I felt a bit uncomfortable and drove down towards the road again. There was a great view to the west. Opposite I saw a small hill with another runway leading up. Spontaneously I decided to go up there to enjoy the view as I had nothing else to do. Furthermore I had never driven a mountain/hill with a moped before. I drove west on the road and left on the next exit. Here I started a stony road again. At a fork in the road I went straight on somewhere, I turned left up the hill. The road got worse and worse. At the beginning I was still careful with fist-sized stones, but later this turned out to be child’s play. The slope got worse and worse uphill and the stones got bigger and bigger. At some point it was almost all boulders over which I was soft in the beginning, but later more and more aggressive as it was quite steep uphill and the machine had no power. I often had to get off the bike and transport it up while the engine was running and accelerating.

Here I started sweating and doubted the success of my intention. Somehow it went however nevertheless and I reached the summit. From there there was a wonderful view over all directions. From the drink strapped on the luggage carrier I took plentifully and looked around me on the mountain. Interestingly enough there were everywhere buried ruins of abandoned old buildings. I could not recognize what that time might have been, since the ruins made themselves noticeable for the most part only by ditches. From time to time I saw old masonry. After some wandering I went finally again on the departure. That was far less strenuous, but altogether the moped was aged approx. 10 years by the excursion. I was already worried if I would have a breakdown that would force me to walk back. Since I had to stand constantly, both uphill and downhill, the handlebar became a little weak and bent down. Luckily, this was done by bending up again. Meanwhile the time was again quite far advanced since it became dark also against 0600 already. I drove again by the city and then further to Legzira. I lay down briefly on the beach and watched the sunset opposite. Numerous dogs were present, of which one lay next to me.

I went again briefly left and right along the beach and considered what I could do so. Here it was a bit lonely for me and with my new motorization I was able to drive into the city. So I got my netbook and drove first to the “bus station” for dinner. In the meantime it had become dark. Already on the way there I drove with my rickety vehicle with full throttle on the country road. Of course we had omelettes and fries and tea for dinner. At this time of day there was a lot more going on in the center than at noon. At noon I hardly saw any people and after sunset the streets and cafes were full. I observed still some time the people and drove finally around the corner into an Internetcafè, which was properly visited with young people. Since Marrakesh I hadn’t been on the net. I think even in Marrakech I was not on the net. I had to wait a little and sat down outside on the steps of the shop and waited and smoked one cigarette after the other. The teenagers spent their evenings here chatting on the computer.

The hour cost also only approx. 1€ and the Cafè with its approx. 10 computers had altogether probably something like DSL speed to offer. I got a relatively old computer on which everything was completely badly installed. But that didn’t interest me very much and I spent a long time answering professional emails and surfing the net. Sometime shortly before 0000 I drove back to Legzira. On the country road, on which I covered the approx. 15 km, it was already quite cold in the night. I parked my vehicle as I had been told hours before by the young hotel assistants on a free terrace and went to my room. On the terrace I enjoyed for some time the silence, the loud roar of the sea and the incomparable clarity of the stars. The clothes I hung up to dry were no drier than I had the day before. I thought at least the sun was doing something, but at 100% humidity nothing works. I studied the planet again and decided to spend the day with the certainty to say goodbye and go to the mountains the next day. 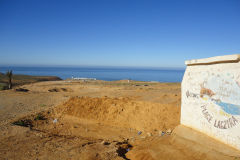 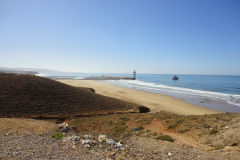 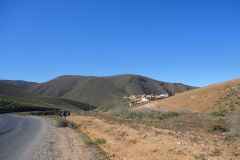 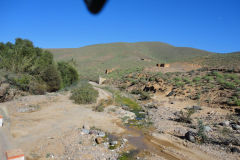 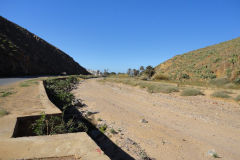 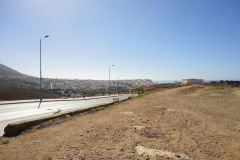 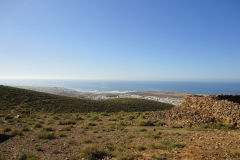 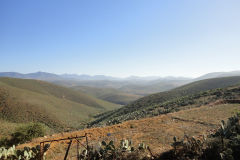 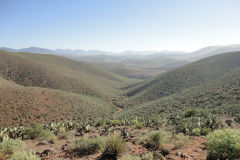 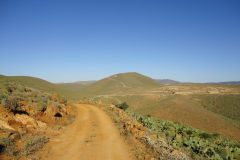 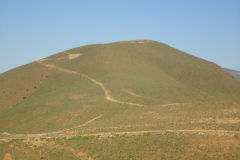 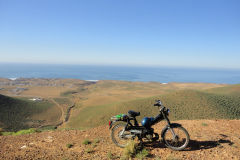 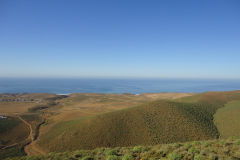 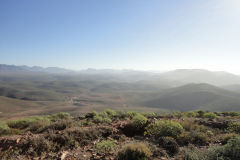 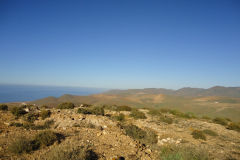 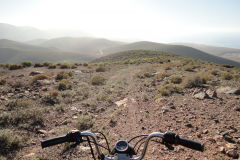 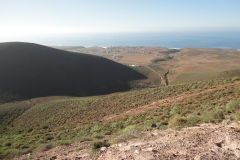 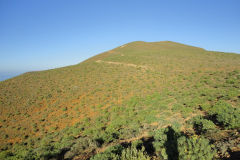 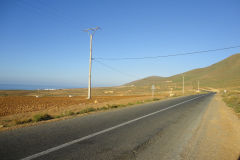 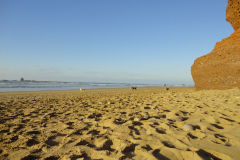 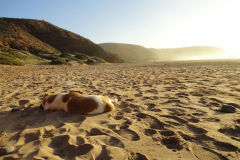 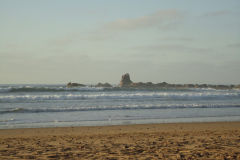 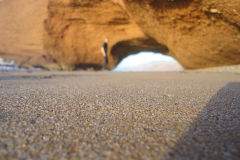 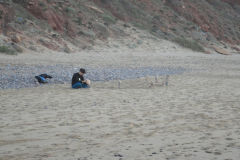