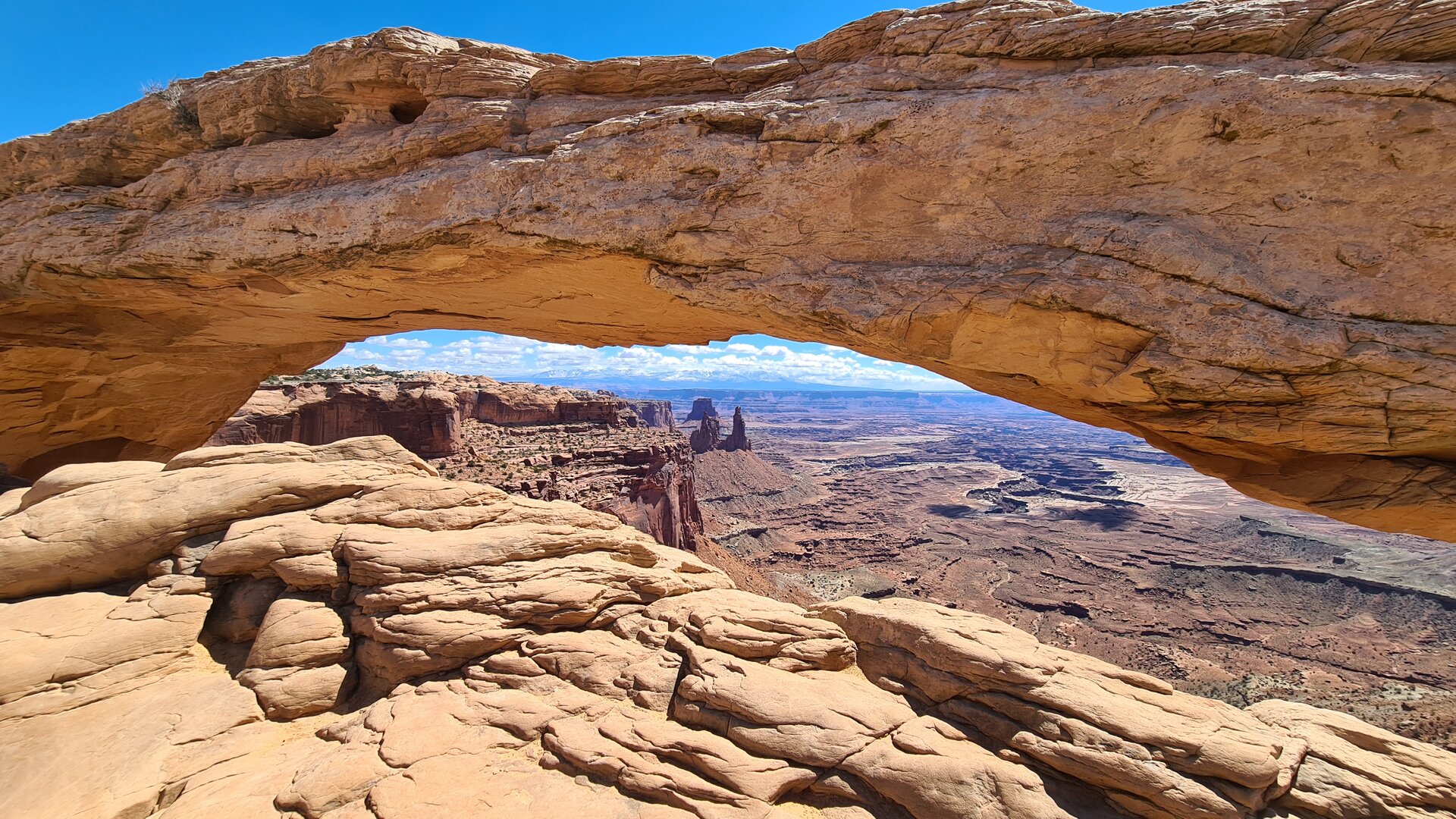 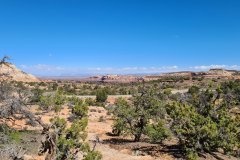 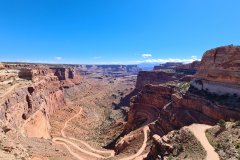 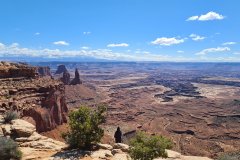 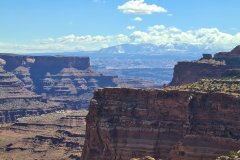 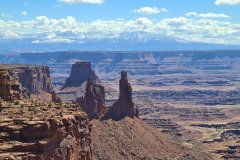 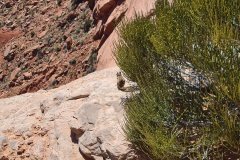 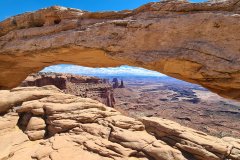 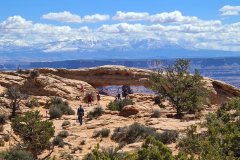 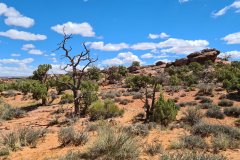 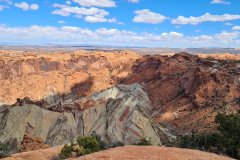 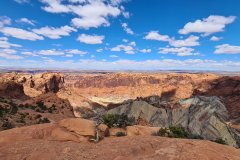 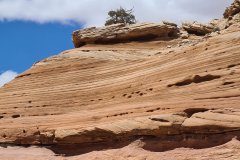 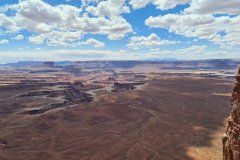 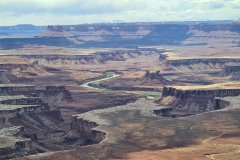 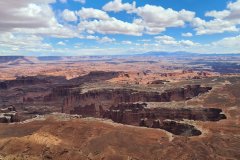 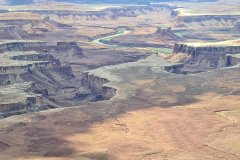 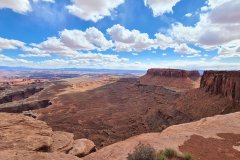 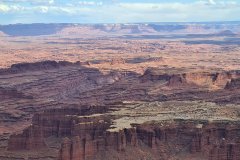 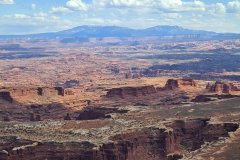 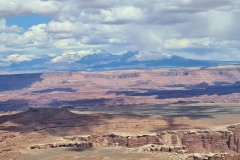 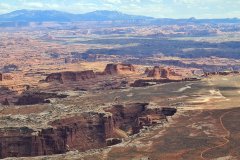 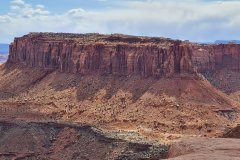 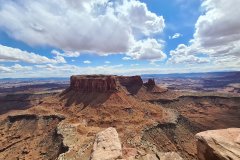 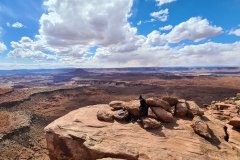 Canyonlands National Park is a United States National Park located in southeastern Utah, near the city of Moab. The park is known for its spectacular canyons, rugged cliffs, and otherworldly rock formations that have been carved by the forces of water and wind over millions of years. It is a place of natural wonder and beauty, offering visitors a chance to explore the rugged wilderness of the American Southwest.

The park is divided into four main districts: the Island in the Sky, the Needles, the Maze, and the rivers (Green and Colorado). Each district offers unique landscapes, hiking trails, and views, providing visitors with a wide range of experiences.

The Island in the Sky district is the most accessible and offers a bird’s-eye view of the park from the top of a 1,000-foot-high mesa. Visitors can take the scenic drive along the mesa top for panoramic views of the surrounding canyons and rock formations. This district also offers several hiking trails, including the popular Mesa Arch trail, which leads to a natural arch with a breathtaking view of the surrounding landscape.

The Needles district is known for its colorful sandstone spires, which rise up from the desert floor. This district offers a variety of hiking trails, including the Chesler Park trail, which leads to a natural amphitheater surrounded by towering sandstone spires. Backpacking is also popular in this district, with several designated backcountry campsites available for overnight trips.

The Maze district is the most remote and rugged part of the park, and is only accessible by four-wheel drive vehicle or on foot. It is known for its challenging terrain and stunning rock formations, and is a popular destination for experienced hikers and backpackers.

Finally, the rivers district offers visitors the chance to explore the Green and Colorado rivers that carve through the park. This district is home to the famous White Rim Road, a 100-mile long dirt road that offers stunning views of the rivers and the surrounding canyons. It is also a popular destination for river rafting, kayaking, and canoeing.

Canyonlands National Park is a place of natural wonder and beauty, and offers visitors a chance to explore the rugged wilderness of the American Southwest. Whether you are interested in scenic drives, hiking, backpacking, or river rafting, there is something for everyone in this spectacular park.

The area that is now Canyonlands National Park has been inhabited by human beings for thousands of years. The earliest known inhabitants were the Ancestral Puebloans, who lived in the area from around 600 AD to 1300 AD. They left behind many artifacts, including rock art and ruins, that are still visible in the park today.

After the Ancestral Puebloans, the area was inhabited by the Ute, Paiute, and Navajo tribes. The Utes were the last tribe to live in the area before the arrival of European settlers in the late 19th century. The Utes used the area for hunting and gathering, and many of the place names in the park are of Ute origin.

The park’s history is closely tied to the human history of the region, as well as the forces of nature that have shaped the landscape over time. The park is home to many historical and archaeological sites that offer visitors a glimpse into the lives of the people who have called this place home throughout history.

Today, Canyonlands National Park is a popular tourist destination, attracting visitors from all over the world who are interested in American history, archaeology and nature. The park continues to be managed by the National Park Service and is protected for future generations to enjoy and learn about the history and geology of the area.

The park is situated on the Colorado Plateau, a large plateau that covers parts of Colorado, Utah, Arizona, and New Mexico. The plateau is composed of layers of sedimentary rock, such as sandstone, limestone, and shale, that were laid down over millions of years. The park’s rock formations are primarily composed of sandstone, which was laid down in ancient river channels and sand dunes.

The most prominent feature of the park’s geology is the canyons, which have been carved by the erosive action of the Colorado and Green rivers. The canyons are deep and narrow, and are characterized by their steep walls and narrow bottoms. The rock layers that make up the canyon walls are tilted and tilted due to tectonic forces, revealing the different rock layers that were laid down millions of years ago.

The park also features several mesas and buttes, which are elevated areas of land with flat tops and steep sides. These mesas and buttes were formed by erosion, as the softer layers of rock beneath the harder cap rock were worn away. The park’s famous mesas such as the Island in the Sky and the Needles district offer panoramic views of the surrounding landscape.

In addition to the canyons, mesas and buttes, the park also features a variety of other geological features such as arches, spires, towers, and natural bridges. These features are formed by the erosion of the rock layers and are a result of the unique combination of geologic processes that have occurred in the park over millions of years.