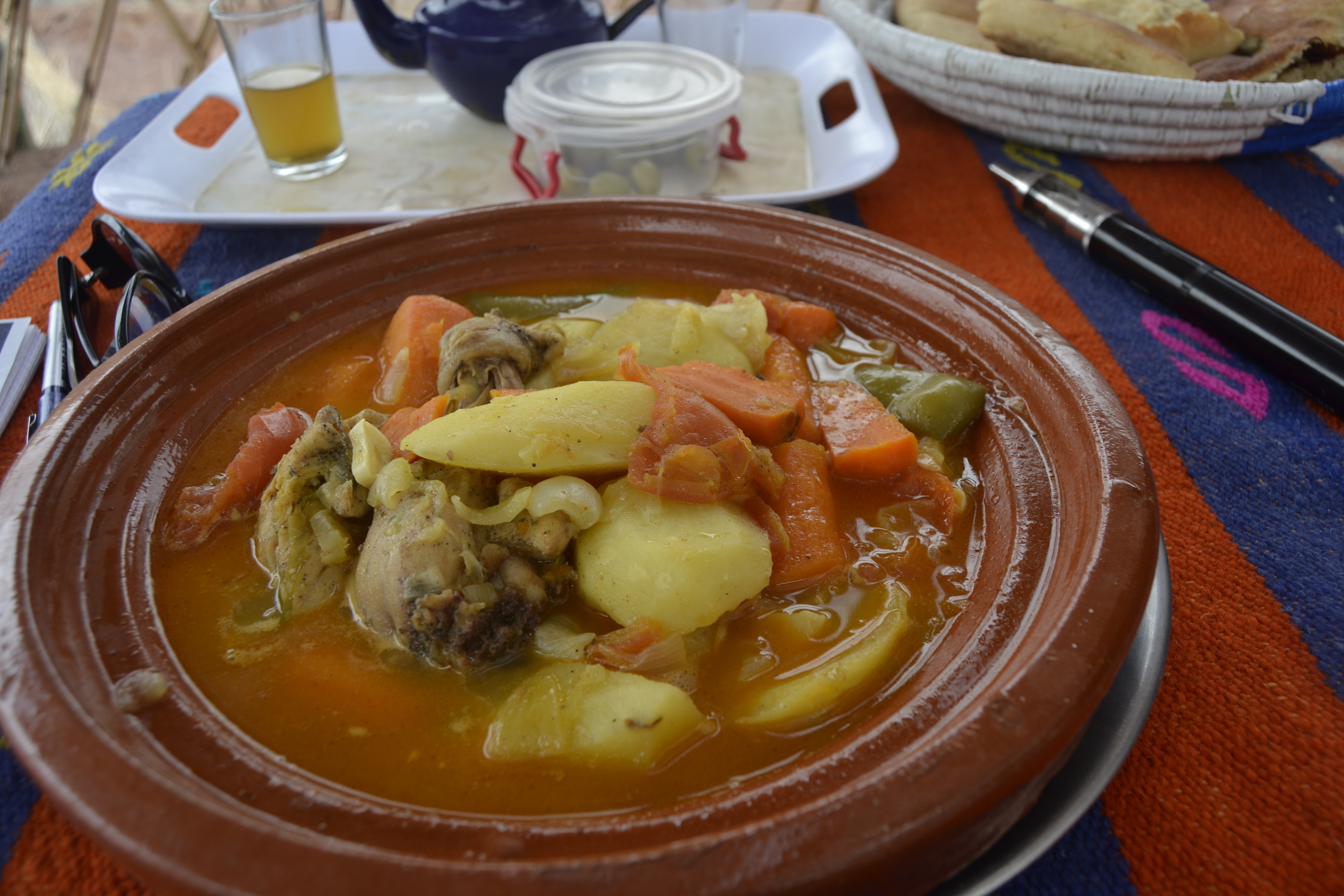 Since this is the second time that I have been in the country and have spent a total of four weeks there, I take the liberty of writing something fundamental about this country.

If you have never been in an Arab country before and then in Africa, then the first day can be a little shattering and frightening. That’s quite the case if you don’t speak the language. If you can speak French, then this is probably not the case. In any case, I can neither speak French nor Arabic and the Moroccans can only speak English in tourist areas. If one gets out of the plane, then one has to fill out an entry form. There, one is asked for the address of the place of residence in Morocco, home address, where from, where to, occupation etc..

When you enter Morocco for the first time, you will receive an entry stamp and an identification number. This form must be filled in at every hotel and on departure. Since we often didn’t know where to go and the paper was always annoying, we became more and more creative when filling it in, so that my job for example fluctuated between “unemployed” and “professeur”. When I left the country the stupid cops annoyed me in such a way that I almost gave everything wrong, except my name. I missed some academic degrees and the appropriate profession, indicated as destination “Plane”, signed with “dirty cops” and so on.

From the airport there is a bus that goes to Jeema el Fna and on to the bus station. The bus costs 30 Dh as a one-way ticket or 50 Dh as a return ticket. I never took a taxi from the airport, but I suspect that it is much more expensive than with the bus. The taxi drivers probably won’t use a taximeter because the taxi would be cheaper than the bus. The bus takes only 20 minutes to Jeema el Fna and you have a good WiFi connection. Besides, it’s always pretty empty. But what I noticed was that there is also saving there by not switching on the air conditioning.

In such cities as Marrakech I always had the feeling that I was being ripped off and you can do that at almost every opportunity. A big bottle of water costs 5 Dh at late hours, a 5L bottle 10 Dh. But for a small 0,3 L bottle one can also pay 15 Dh. Basically one should always ask before how much one should pay for it. This is especially true for things you can’t give back like food or taxi rides. If you get off at Jeema el Fna, you will be released especially in the evening into a seemingly chaotic maelstrom of honking cars, crowds, children, old people, beggars, donkey carts, horses and wild mopeds. In addition, you are approached almost instantly when you leave the taxi or bus.

The taxi driver might have tried to hurt you before. Again such a basic rule: Never let yourself be chatted up, but always know what you want! You will rarely get anything there. Someone will always try to sell something. Be it for the way you let yourself be shown or whatever. Touris in Marrakech are immediately recognized by the locals if they do not come from Morocco itself. You can dress as you want but it won’t work. Thus one is addressed on the street in Marrakesch every 30 seconds by someone. Be it to sell food, to serve as a guide, to give money to beggars, to sell trinkets or whatever. If you are attentive you will notice that you are also constantly honked by empty taxis to draw attention to yourself.

Honking is a language in its own right and a slightly longer horn means: behind you is an empty taxi and can take you without a taximeter at completely overpriced prices. See one rule again: Decide for yourself and choose a taxi if you want one and insist on the meter on. The short distance costs 5 Dh and not 30 or anything else utopian. The constant annoying chat gives itself something if one looks self-confident and not confused and searching. Even more if you don’t appear as a freshly arrived touriopfer with pale skin. You can now answer all the time and that really means all par seconds with “No merci!”, “La Shukran!” or my preferred variant, say nothing at all, mixed with variations of “Fuck off” and the like when you’re annoyed to relax.

I don’t see that as unfriendly, but especially the people who invade my privacy are unfriendly and harass me by constantly addressing me personally. You also have no peace when you sit down. Someone comes by and talks to you. And that only takes seconds! That does not mean now that one should be deterred from it. With peace and self-confidence you can experience Marrakech well, but it annoys me extremely in the long run. For many, especially beggars, this is perhaps the only way to make ends meet. Others try to become rich or already are. In the Medina and in the Suks of Marrakech or perhaps also in other big cities like Fes you surely have the biggest choice of all kinds of souvenirs.

Exactly there they are extremely expensive. The merchants always try to get as much money as possible out of your pocket. In order to find out a good price one cannot get around some work. What one wants to have or similar there is surely also equal 3 m further. One asks for the price and should not be ashamed to offer a tenth of the mentioned price. The dealer will then drastically go down from his price, which is still much too high. Then you go a little higher and leave the shop. If the dealer follows or agrees, then the price is ok. That won’t work immediately, but with a little practice you can achieve a lot.

As an example I can mention my kilim from the penultimate trip. I got it for 200 Dh and some aspirin. The dealer only wanted over 2000 for it. During the last trip I wanted a Kelim again, but somehow it was hard to find a carpet dealer. In the middle of the central Suk of Marrakech I tried my luck by having one shown to me and offering 200 instead of the 2400 Dh that he wanted. But the guy was a kind of sleepy cap, so we left the shop quickly although I would have gone higher. Basically, one can and should always act, which proves to be positive especially for hotel rooms if one is there for a few days. In the low season you can negotiate properly or go further. There are normally enough hotels everywhere. But it was quite expensive also in the low season at the beginning of the Dadess Gorge.

Actually it wasn’t expensive but completely overpriced for what you should get. One room was for two persons 500 Dh. However without heating and without further. We asked still for heating and the type meant still it does not become cold. This brings me to another general point: Often the price/performance ratio is not right in any way. This can concern all things.

For 50 Euro per night one gets a room without heating, probably without WiFi, without warm water, with bedspreads because they are still washed in the river, power cuts, some other restrictions after one has paid, thin walls and not properly closing doors, dim light, only a socket, which, due to the extremely fluctuating voltage, cuts up your electronics, no towels, no soap, no TV set, goggling staff, attempts to sell any things, no receipt, prepayment, incredibly dilettante bays as rooms or/and decay of the same, dirt (there’s no vacuum cleaner!), unwillingness and inability to repair anything, extremely poor hygiene (yes, this is one of the countries where people wipe their butts with their left hand and dig around in mincemeat), no toilet paper (for safety’s sake we always had enough with us), an unoccupied reception in the morning because the bed-clubs (this is the advantage of paying in advance, that you can leave right away), and much more. That’s what I write here as an example, because I had all this for a price of 100 Euro in one of the most expensive cities in the world.

But that doesn’t mean that you should be afraid to drive into the country. Such incidents are varied and promote the consciousness extremely. In addition you learn to cope with the most different incidents. Morocco is an extremely beautiful country and the inhabitants are extremely nice and helpful people. I was once in 2011 in Morocco in a really bad area and thought to myself whether they would kill you or kidnap you or who would do that in the world. The thought was distant and yet so obvious when you think about how foreigners are doing in Germany.

As an African I would not visit Germany in any case, because intolerance and xenophobia would threaten me there. I think there have been more attacks and murders on foreigners in Germany in recent years than on Germans anywhere in the world. Not to mention the time at the beginning of the 20th century. The people there are mostly bitterly poor. There you can see children without limbs sitting on the street and begging. On the other hand one meets rip-offs, which however only a really small portion of the natives amounts to.

Here is to be differentiated and no blanket judgements on the population to place. In Europe, banks are gambling with billions of taxpayers’ money and others without anyone but a few minorities complaining. So be open to it and learn from negative experiences. I can only recommend this country to everyone. Today in the year 2016 it is unfortunately the only North African country in which one can move freely and safely. How I would like to drive through the boundless vastness of the Sahara through Algeria and Libya. But maybe that will happen again.