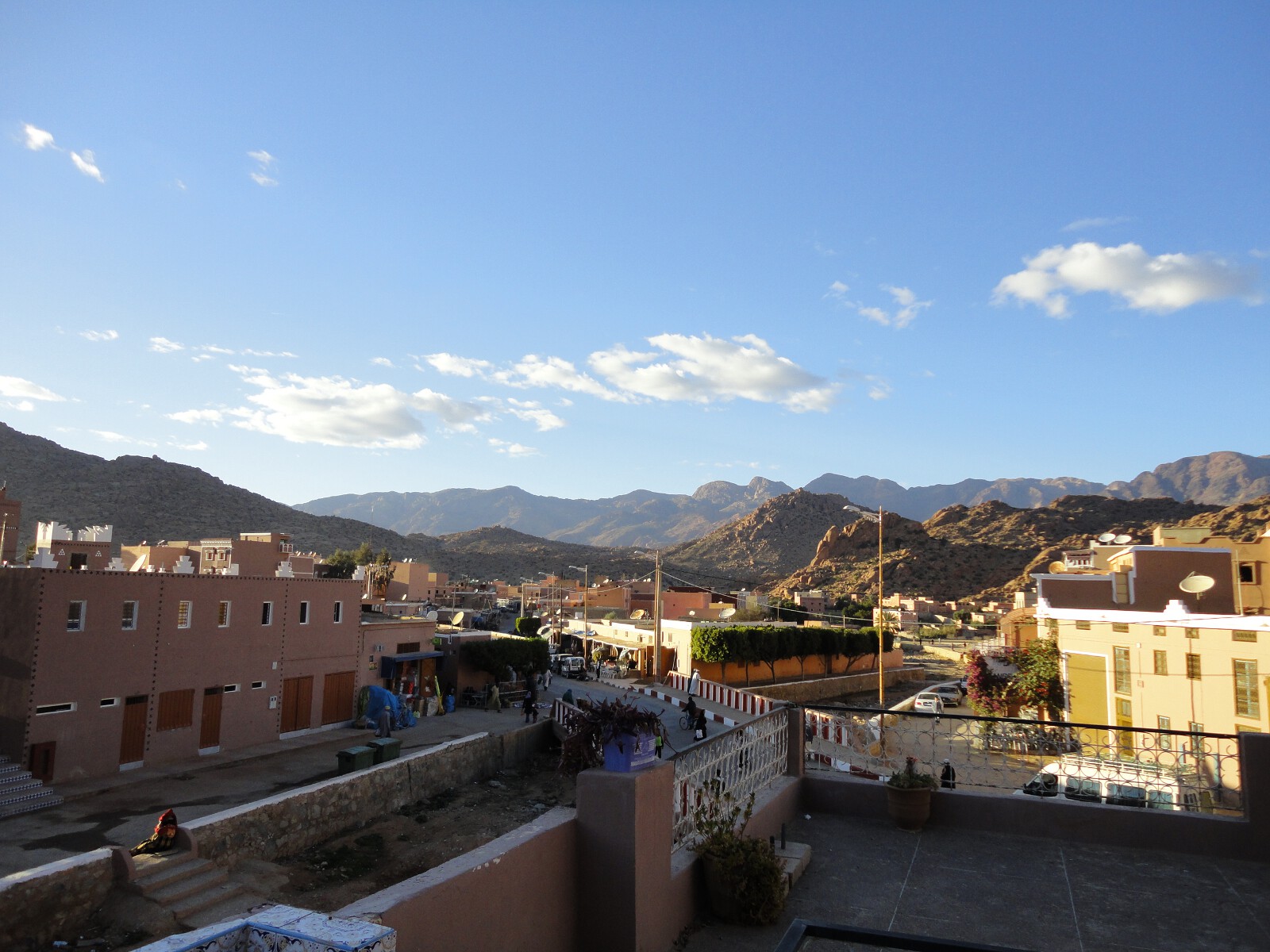 That day I got up early again. Meanwhile I had covered 500 km in the country mostly by bus. Today it should go 200 km further into the Anti-Atlas to Tafraoute. I had to bring the moped back before and to clarify the journey, which however could not be clarified actually, but had to happen spontaneously. I took another photo of my terrace in Legzira, showered abundantly with warm water and went to fetch the moped. That stood also still as I had turned it off. I also took a photo of it, because I won’t have the opportunity to be at such a place with a moped again, especially since the picture looks pretty. On the luggage rack you can also see the reserve liter of fuel in the plastic bottle, which I luckily did not have to touch although I always drove full throttle and my empty drink bottle.

I paid my relatively steep bill and drove up the road a bit snivelling towards the country road. This place is really great, but only if you are mobile, best of all in your own car. Looking back I took a photo on which Legzira is again not to be recognized at all. I drove into the city to the moped rental company. We had clearly arranged the time but of course nobody was there. So I drove to the cafè at the “Busbahnhof” for breakfast. There was again plenty of tea, cigarettes and omelettes. I drove afterwards again around the corner to the moped lender to again determine that nobody was there. I relaxed still briefly on my errands for the journey. I still needed something to drink and food for on the way. Just as I had calculated, the trip for the 200 km should last until this evening.

So I bought flat bread, cigarettes and cheese in a small shop. Fortunately there was also a small café in which I sat down again and studied the planet at a milk café. I drove again to the moped rental company. This time he was there and I could hand over my vehicle. For the remaining Sprit in the bottle gaves money back. The vehicle made also a tidy impression, so that there were no problems. Now again on foot I went to the taxi stand at which I had arrived. Some taxis stood there and I asked the first one after Tiznit. I had to drive over Tiznit again to find a way to Tafraoute. Luckily it didn’t take long and we started around noon.

This time the trip seemed to be shorter but that’s the way it is when you know the route. Arrived in Tiznit after maybe 2 hours I went to the first best one and asked for the taxi to Tafraoute. Fortunately I didn’t have to wait long and the taxi was filled with the seven people to drive into the mountains. As we left the city to the east we went through a flat landscape. But I saw the mountains and the slow ascent through the relatively vegetationless landscape from a distance. It went higher and higher. The old Benz also did his work splendidly. It closed over passes always higher up and then again down. We really drove on mountain ridges and then down again into a valley lined by mountain ridges. I don’t know what the valley was called, but it somehow showed some relative wealth. Here the tourism had to be quite well developed.

Everywhere you could see trees and small brooks. The serpentines we drove were extremely impressive. Too bad I couldn’t drive my own car to stop at any place I was interested in. Already quite late in the afternoon we finally reached Tafraoute. The sun was already setting behind the hills that surrounded the city. The landscape looked quite spectacular. However, the place was quite small. There were a few quite cheap and a really expensive hotel to choose from. First I tried to orient myself. In the middle of the city there was a wadi, which should be a rather raging river if it had water. Now there was nothing to see of it, completely dried out. As soon as I walked a little further from the clear centre over a bridge, someone spoke to me in best German.

We got into conversation and he told me that he was in Leipzig to study. He also knows Connewitz and other things. But I didn’t feel like spending the scarce time talking. I hadn’t even found a hotel yet. In the first one I asked for there was no room for me. Everything fully booked. I couldn’t really believe that, but it didn’t matter, because 50 meters further on was the next one. The night should cost something around 50 – 80 DH again. Accordingly the room was also again. Only electricity, but this time no shower. Maybe I could have taken a better one, but after the two days in Sidi Ifni it worked. The hotel had already come down quite well. Toilet was also only outside. But that didn’t matter to me at that moment. I actually only wanted to stay the night here, because the city was quite manageable and there was nothing for me to see on foot. First I found a staircase to the flat roof of the hotel.

The roof was totally garbage, but offered a really great view over the city. I took some photos, stared down and through the area and then walked out through the city, which is at least 1000 m above sea level. From the beach at an altitude of 1000 m, so to speak. Not much but at least. In spite of the 1000 m it was still 25 °C in the late evening in January as one picture shows. The Grim Reaper and the other one are used to completely different temperatures, which is why they wore a little thicker clothes. Altogether the city made a quite tidy impression on me. So in approximately Allgäu of Morocco. Nevertheless there was nothing to see here. So I decided to go the next day directly to Taroudant. With the short side trip I could at least say that I was also in the Anti-Atlas. I moved on through the quite small center of the city.

The guy from first had told me that here often parties take place in the mountains a little off the beaten track. Electric generator and plants and off it goes by the whole night or week. Shortly before some Austrians with motorhomes and off-road vehicles are said to have been there, who had done exactly that. I could imagine that really well. So I decided to go to the more expensive hotel nearby, with the certainty to find a bar there where I could sink a bit. That was the case and I ended the day after a few beers with some outdoor freaks. 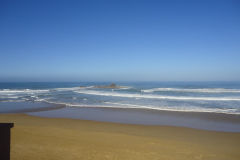 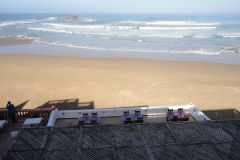 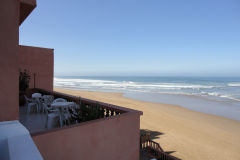 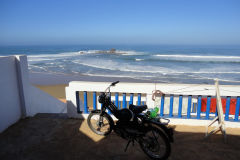 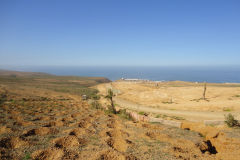 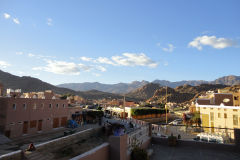 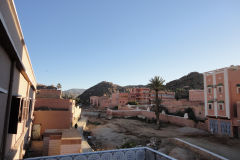 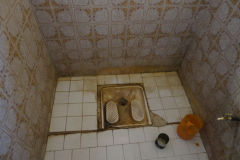 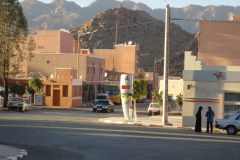 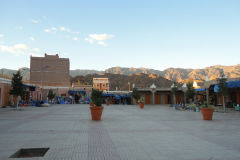 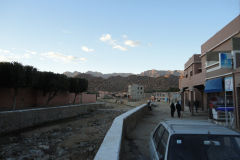 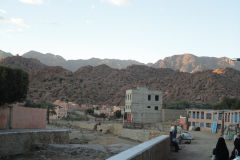 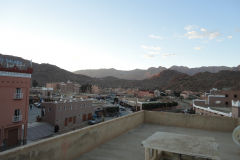 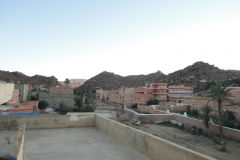 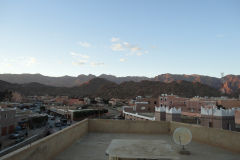 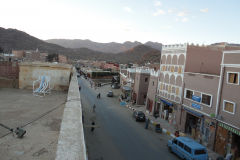 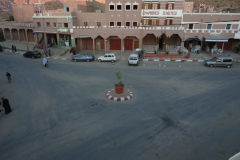