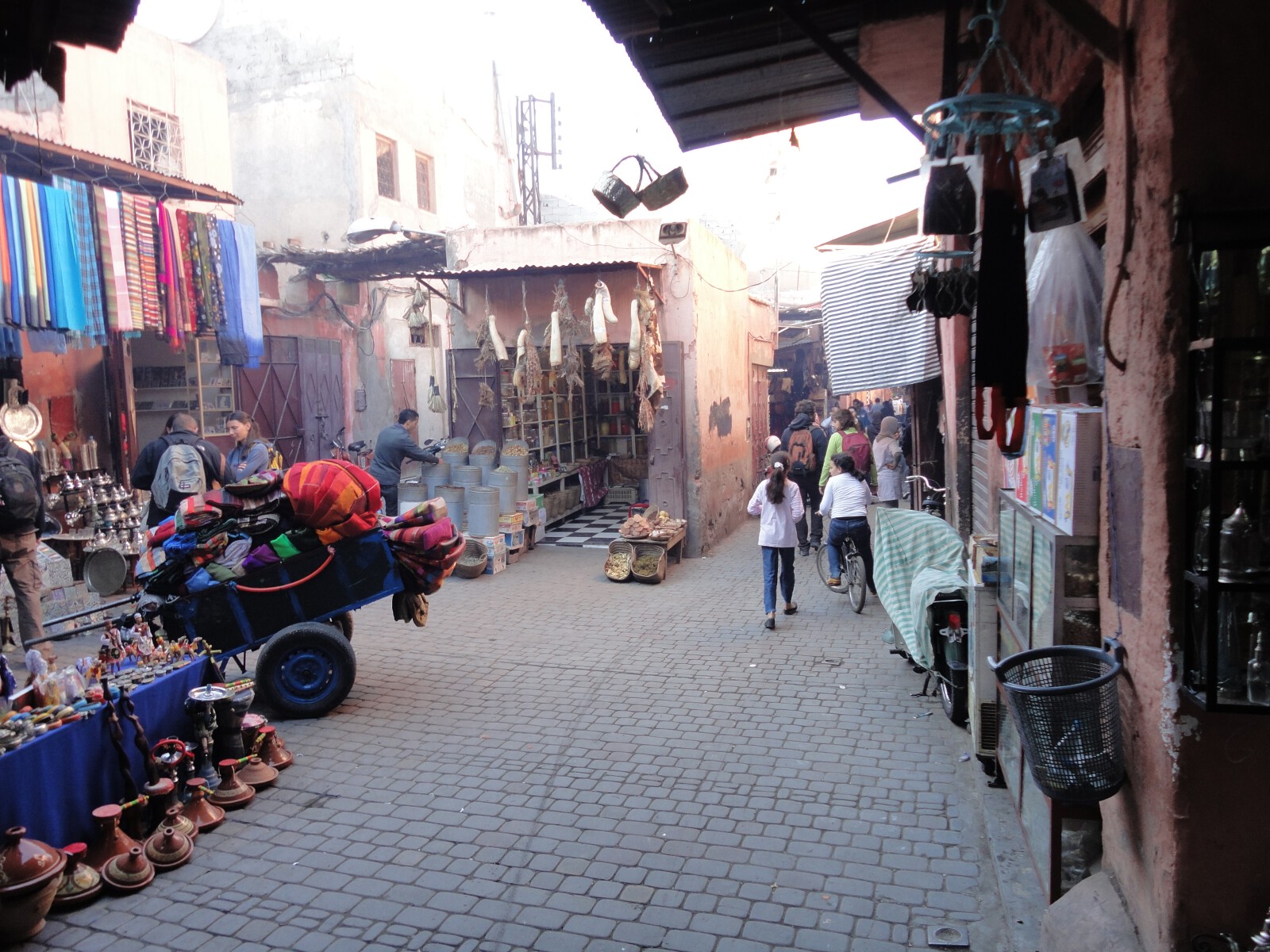 After some typical teas with mint I freshened up in the bath and went towards Djemaa el Fnaa. On the way by the Medina in the narrow lanes there was already again lively activity, but not to compare with the crowd from the night before. Everywhere there was something to see, but nothing that could interest me. I couldn’t take anything with me anyway with a 10 kg luggage limit. The Djemaa was completely empty at this time. So no stands only numerous people who were on the way. Here I first noticed the relatively numerous tourists, who differed clearly from the locals. So also I thought to myself, although I was anything but suitable for the evening with my clothes. In the main street in front of the Tazi I sat down in a café directly opposite the Tazi. In the rising sun there were omelettes and two decent coffees. It cost about 35 Dh.

In the planet the route was searched out. First I wanted to go north through the medina towards the bus station and Neustadt. The north of the medina was more occupied by grocers than the central part. Everywhere there were dead animals and animal parts, which lay around somewhere or hang around. Also lots of vegetables and fish. There was already a lot going on at the bus station. But I didn’t want to go there yet to see how and where it could go on. The planet had already told me bus lines and prices, but the direction was not clear yet. The bus station was directly at the northern gate to the medina. At some traffic islands I walked further north. The Neustadt was already optically something completely different in comparison to the Medina. Numerous new buildings, many building sites and many western cafes and shops were located at the road.

The road might have been Mohammed V, as probably all main roads in cities in Morocco, as I noticed later. On the street McDonalds could not be missing either, of course. The hotels and shops looked rather high-priced and were it also. At a corner cafe I stopped to drink some coffee and to look in the planet where it should go on. All the time sunglasses sellers ran by and wanted to get rid of their pseudo D&G stuff. That was annoying, because I would have liked to have sunglasses but my glasses didn’t allow a second one. Finally I walked further north, maybe it was also west the road to the end of the buildings. There was a small hill on which I didn’t want to go, because my untrained feet were already hurting me and I was heading towards the afternoon. So I ran back, also on the search for something to eat. At a characteristic station for the city tour buses driving there I walked to the left a little more away from the main road. The side streets had something of Dresden-Neustadt. Many people on the way and everywhere chairs on the streets. In some restaurant I settled down to have a tajine. The Tajine was then by far the best of the whole tour with all its little bowls which belonged to it.

The price was also not very high with approx. 45 Dh. (4,5 €) True to the motto, go where the locals eat, that was a good decision. Through the side streets of Neustadt I walked back to the main street. There was a corner cafe and a bus stop for the tour bus. I had to go to the toilet and asked where it was. One floor up I made for the first time acquaintance with the local toilets. While walking I put 5 Dh on the counter. When I left the bar one followed me and wanted to give me the money back. I would have least expected such a thing. The tour bus cost 140 Dh for 24 hours. After about half an hour it finally crawled through the heavy traffic. I simply had no desire to go back, because the distance was simply too far.

In the tour bus I took myself a place right on top in the sun with the open canopy. The bus tortured itself through the congested streets. The information with the headphones was in several languages, but the synchronization with the things to be seen did not work at all. I tried constantly to get along with the planet and the language and the things to see. At some point I gave that up. Arrived in the Medina I got out one station before to walk a little bit through it. Coming from the side everything was a bit more neglected and dirtier. I wanted to find something to eat, but couldn’t make up my mind. So I ran as well as I could to the Djemaa again. I wanted to sit down in a restaurant to eat something or at least drink a cafe. I decided for the highest of the restaurants. The entrance was on the right from the square and led up a narrow staircase over two floors. On the roof terrace were still two people present, which went however equal. It was a little windy and cold. But the sun provided some warmth.

I waited only a while, until I remembered again what. So I went down one floor and made my order. It should be a coffee with milk. On the roof terrace the view was quite nice. On the left in a backyard there was a pile of ceramic tajines. I just couldn’t see what was wrong with them. 100 m further the expensive ones were sold to tourists. Opposite over the flat building dozens of satellite dishes were to be recognized. Slowly then also the structure of the market began for the evening. With donkey carts or pulled by hand the wooden slats and tarpaulins were brought into position. This happened by all dealers almost simultaneously. Everyone knew where to set up his place and without any recognizable markings.

After about half an hour everyone was ready and the grills started to steam again and to wrap the place in a whitish mist while the sun went down. On the place it became now also fuller. I wanted to pay. Of course the guy never came by again. So I went down the floor again and asked for the price. Actually completely wrong, but he also quit me with the double price for the milky coffee. 20 Dh for the drink was clearly too much. I got terribly upset inside and swore to brand him as a fraud. I went left into the park again to sit on a bench and watch the hustle and bustle. After I had sat there 5 minutes, much a woman approx. 50 m of me in Ohnmacht.

Immediately an active grape formed around the fallen one. However, this was perhaps not a fainting, because she screamed quite loudly. One brought her on a bench and after approx. 15 min everything was again past. Two policemen passed by, but no ambulance. One of the policemen grabbed some guy and smashed his helmet in his face. Inexplicable events. Now it slowly became dark and much colder. So I went back to the hostel through the medina. It was again very spectacular which crowds squeezed through there. In addition still the bicycle and Mopedfahrer and perhaps still another donkey cart. At a narrow place there was a traffic jam like to a completely sold out concert. Some could easily panic. In the hostel I went to the roof terrace.

In my room there were now two Englishwomen and one from Stuttgart. The two English women had spontaneously visited Marrakesh, but were there on their last night. The night before they had spent in the desert near Zagora. I talked to them on the roof terrace for quite a while. They had taken part in a trip from Marrakech. Desert and tent, music, fire, wine and food as one imagines it or not. Additionally two Americans had arrived. Someone was sent to get some wine. The wine arrived after an eternity. In the meantime also numerous Brazilians had arrived. Meanwhile I counted about 10 Brazilians who had not arrived in a group. I couldn’t explain why they had just come to Marrakech. The density of Brazilians was about 50 %, while the rest came from all over the world. Meanwhile it was around 2330.

We still had desire on some beers into the Tazi to go. The crowd was now much smaller, but still impressive many on the way, mostly locals. But now the moped drivers became more aggressive and drove partly with approx. 30 km/h through the narrow lanes past the people. In the Tazi there were not so many people present. This was probably due to the unchanged high prices for the beer of 25 ie for 0.2 L. compared to the previous evening. But we didn’t care. We drank perhaps two or three and made ourselves again on the way back. On the street to the square there were still many beggars on the way. One Englishwoman took pity on us and gave one of them something. We went again on the place where the rest took still something to food to itself. The two Americans wanted still in the El Pasha or another disco. Me and the English went to bed now. 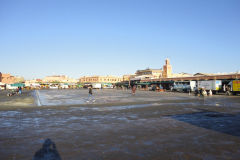 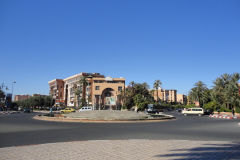 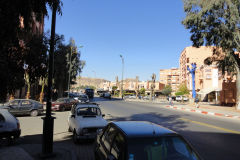 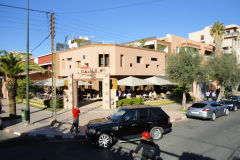 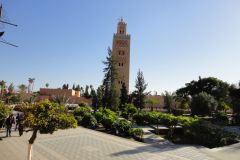 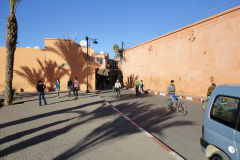 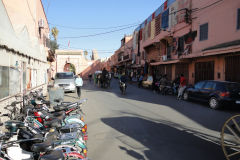 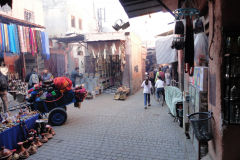 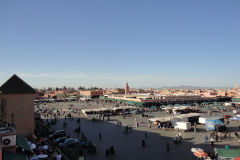 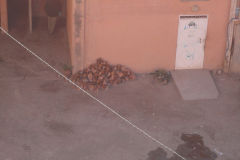 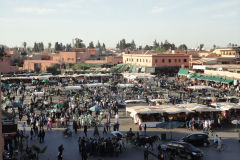 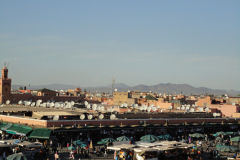 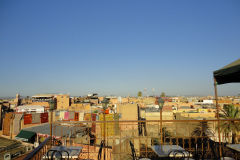 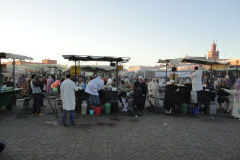 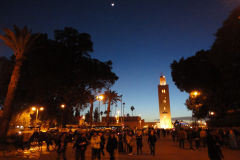